Stephanie Bishop on Migration, Motherhood, and Longing for Home Stephanie Bishop’s new novel, The Other Side of The World, has been enjoying high praise since its release last month. Bishop is no stranger to such accolades – in 2006 she was named one of the Sydney Morning Herald’s best young writers for her first novel, The Singing. The Other Side of the World was shortlisted for the 2014 Vogel Literary Award under its original title, Dream England. Better Reading spoke to the Australian writer about her second novel.

Better Reading: There’s been a huge buzz around The Other Side of the World already with one reviewer naming it as one of their all time top ten books. Has this taken you by surprise?

Stephanie Bishop: Yes, this has totally taken me by surprise. I spent so long working on this in almost complete isolation. For three years I didn’t show it to anyone. And then it took a while to find a publisher. I thought perhaps it would end up being a small literary publication that I might feel a little apologetic about. Ultimately, I write because I have to, I can’t imagine not doing this, but for the most part I also write without any view to publication. Thinking that what I write may (or may not) be published would be crippling in some way. It is an intensely private process, so yes, it’s very strange to see that work externalised, and existing in the form of a book. The hope of course, is that what you write will connect with people, but I’ve been absolutely blown away by the response to this novel. It’s incredibly exciting, and a huge honour really.

BR: The Other Side of the World vividly describes 1960s Cambridge, Perth, Delhi? How were you able to come up such evocative descriptions?

SB: I’ve spent a lot of time in all these places: I lived in Cambridge for five years, my husband is from Perth so I visit there a lot, and I travelled to India on an Asialink Fellowship. I’ve come to realise that my writing always begins with place: it starts off as a series of descriptions, and the story and the people grow from there. The descriptions in the book emerged, by and large, from my obsessive noticing and note-taking that occurred when I was living in those places.

BR: Charlotte is a highly sympathetic character despite some of her difficult decisions. Did you feel close to her as a character?

SB: Yes, I did feel close to her character. She is placed in a very difficult situation and I felt for her in her struggle. She does make some decisions that can be very confronting, especially for women who are mothers. In the process of writing her I did often feel as though I was being emotionally pulled in two very different directions. I wanted to support her behavior and her decisions, whilst knowing these were not things I would necessarily choose for myself. I had to understand her as a person of deep complexity who carried inside them warring versions of their own life.

BR: The descriptions of your characters’ displacement and longing for home are compelling. How much of that was researched from real people’s lives?

SB: Yes, the issue of displacement and homesickness did emerge from real life. In the first instance, I drew very much on my own experiences of displacement, moving from Australia to England and then back to Australia again. It was through my own experience of dislocation that I became interested in the migratory history of my grandparents. My grandfather is Anglo-Indian and was born in India before being sent to England as a boy in the lead up to Indian Independence. Then, as an adult in the 1960s he decided that he, my grandmother and their children should migrate to Australia as part of the Assisted Passage Scheme. In the process of researching the book I did take oral histories from my grandparents and my mother. I also spent a lot of time consulting archival material and following the story of people whose journeys were similar to that of my own family. Despite fact that the decision to migrate was often a very deliberate one, and one that required much planning, the archives are full of stories of women not so unlike Charlotte, women who found themselves profoundly isolated in an unfamiliar country and were almost crippled by homesickness.

BR: What inspired you to come up with the character of Henry, who with his Anglo-Indian heritage feels displaced in his birthplace India, in England and also Australia?

SB: Henry’s history is largely modeled on the history of my grandfather, who was born in India as an Anglo-Indian, sent to England as a boy and then, as an adult, decided to move to Australia. The actual character of Henry and the character of my grandfather are quite different, but I did use my grandfather’s journey as the basis for Henry’s life. My grandfather has always asserted his British origins, and never actively acknowledged his Indian heritage. Growing up, I found this fascinating, and wanted to explore this hybridisation or confusion of identity within the context of the novel. The more I looked into this, the more interested I became in the predicament of Anglo-Indian identity. I came to realize that my grandfather’s situation was not unusual, and I wanted to think about this marginalisation of postcolonial identity, one that was much more widespread than I first realized.

BR: What contemporary or classic Australian authors do you admire?

SB: Helen Garner would have to be up there at the top of the list. My mother gave me Monkey Grip to read when I was in high school, I’ve still got the old paperback version with a picture of a Noni Hazelhurst on the front. Other favourites include Christina Stead, Randolph Stow, Drusilla Modjeska and Elizabeth Jolly.

BR: Are you currently working on your next novel? Are you able to tell us a little about that? Book of The Week 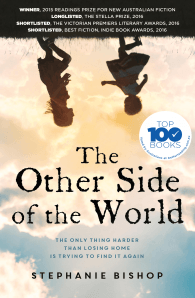 Why We Love it

Evocative and heartbreaking, The Other Side of the World kept us spellbound. It’s a beautifully told story of motherhood, marriage, creativity, identity, and nostalgia for place. Its vivid and gorgeous descriptions transported us from the wintry fields of Cambridge, to the intense light of a Perth summer and to the mud, dust and chaos of 1960s India.

English-born Charlotte is struggling with motherhood and trying to find time for her painting. Her Indian-born, poetry-professor husband wants things to be as they were and dreads the thought of another harsh English winter. As the distance between Charlotte and Henry grows, he grasps at the promise offered by a brochure proclaiming ‘Australia brings out the best in you’. Charlotte doesn’t want to leave her familiar home, but is too exhausted to fight, and gives in.

But their new life is not the answer either was hoping for, as Henry is increasingly isolated among his parochial university colleagues and Charlotte finds herself lost and anchorless in the Perth suburbs. What will she sacrifice to regain her feeling of ‘home’?

Stephanie Bishop is a rising literary star, with critics singing her praises. In 2006 she was recognised as one of The Sydney Morning Herald’s Best Young Australian novelists, and Helen Garner has described her as ‘a striking new voice, calm and fresh.’

Geordie Williamson, The Australian’s Chief Literary Critic, says ‘the story of Charlotte and Henry – the melancholy beauty of its prose and the sharpness of its insights into nostalgia and belonging – has stayed with me for weeks now.’

With its deep themes and emotionally charged ending, The Other Side of the World is a book to curl up and spend time with, and book clubs and reading groups will love it.

Reviewed by the team at Better Reading.

Enjoyed our review? Please use the icons on the left to share on social media.

Read Felicity Plunkett's review of The Other Side of the World in The Australian Newspaper here. 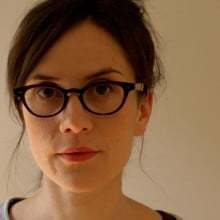 A stunning emerging Australian writer, Stephanie Bishop's first novel was The Singing, for which she was named one of the Sydney Morning Herald's Best Young Australian Novelists. The Singing was also highly commended for the Kathleen Mitchell Award. Her second novel, The Other Side of the World was recently shortlisted for the 2014 Australian/Vogel's Literary Award under the title Dream England.

Stephanie is a frequent contributor to The Times Literary Supplement, The Australian, The Sydney Review of Books, The Australian Book Review and the Sydney Morning Herald. She holds a PhD from Cambridge and is currently a lecturer in Creative Writing at the University of New South Wales. Stephanie lives in Sydney. 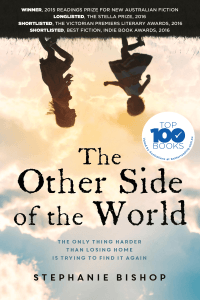 The Other Side of the World