Sweeping Kimberley Epic: Review of The Valley by Steve Hawke It’s 1916, and Billy Noakes has gone in search of his older brother. After Billy and Des’s mother died, Des went 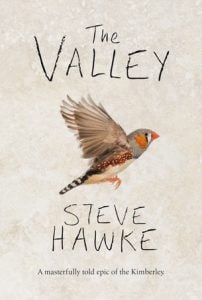 out bush and took up with a ragtag band of odd-jobs men, but by the time Billy joins them, tensions are running high. Soon after Billy arrives, the group’s hardened leader, Twelve Inch, shoots Des and tries to kill Billy too, but Billy retaliates, and fatally wounds Twelve Inch. Terrified that Twelve Inch’s cronies will find him, Billy flees to a remote valley with Bessie, a young indigenous woman.

In 1943, Wajarri joins his father Billy on a rare expedition to collect supplies. Although Wajarri wishes his twin brother, Janga, could accompany them, their father fears the lighter-skinned boy will be stolen if he ventures beyond the safety of the valley they call home. But what Wajarri doesn’t know is that Billy has chained Janga up to stop him following them – and when Wajarri and his father return home, they find Wajarri’s mother in hysterics, and Janga’s leg-iron smashed open. Janga has run away, and he isn’t coming back.

On a stiflingly hot day in 1989, nineteen-year-old Andy Jirroo is driving to Broome; returning to his hometown after two near-perfect years working at Boxwood Downs. It was at Boxwood where he met and fell in love with Milly, daughter of the town’s head stockman Wajarri, and the mother of his baby son, Robert. But Milly never recovered emotionally after Robert’s birth, and it’s wasn’t long before she vanished, leaving Andy and Robert behind. Fleeing from the pain of losing the love of his life, Andy is going home.

Broome, 2005. Sixteen-year-old Robert – or Dancer, as he’s called by all who know him – has just been at the funeral of his beloved great-uncle. Stricken with grief, he follows his girlfriend to a friend’s house, and gets high for the first time in his life. But the night soon turns sour, and Dancer gets into a heated argument with two older boys, members of a bikie gang. Dancer is dead meat, they growl, and Dancer, high and consumed with grief, knows he has to leave town…

A sweeping epic of a novel, The Valley follows four generations of young men from the Kimberley region in WA, as they undergo transformative life experiences and come to terms with a family history marred by tragedy. Each of the four main characters are well crafted with distinct and interesting voices, and it’s not hard to be drawn in by their stories, to root for them to find the answers and the sense of peace they each so desperately need.

The Valley is also imbued with a strong and authentic sense of place. Author Steve Hawke became entranced with the Kimberley as a nineteen-year-old, living and working there for nearly fifteen years, and his love and understanding of the region shines through in his beautiful descriptions of the titular valley, the blazing Western Australian sun, and the tiny, tight-knit communities dotted throughout the area. The Kimberley really comes alive in this novel, and if you haven’t been, it’ll make you want to go there.

A big-hearted and sensitively told story, The Valley is a tale of love and loss, of family and the importance of owning your past and finding your identity. A highly recommended read. 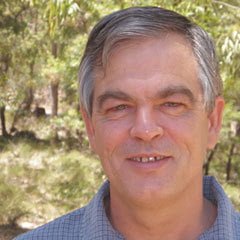 Steve Hawke grew up in Melbourne, but found his way to the Northern Territory and then to the Kimberley as a nineteen-year-old in 1978. Captivated by the country, the history and the people, he stayed for almost fifteen years working for Aboriginal communities and organisations. He now lives outside Perth, but continues his strong association with the Kimberley, returning most years. His writings on the Kimberley include Noonkanbah: Whose Land, Whose Law, the children’s novel Barefoot Kids, the play Jandamarra that premiered at the Perth International Arts Festival in 2008 and toured the Kimberley in 2011, and A Town Is Born: The Fitzroy Crossing Story. The Valley is his first adult novel.

Purchase a copy of The Valley here It Poses Hard, Ethical Questions About Quality of Life: Read an Extract from Out of Time by Steve Hawke It is a Book that Seeks Emotional Truth: Q&A with Steve Hawke, Author of Out of Time A Beautiful Picture of Family, Friends, Love and Loss: Review of Out of Time by Steve Hawke 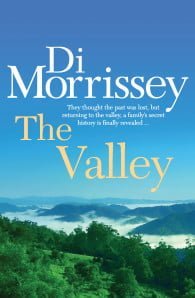 The valley is nestled between rugged peaks, divided by a magnificent river. Within its peaceful green contours are held the secrets of generations of tribes, families and loners who have come under its spell.But some secrets are never shared, never told.Until one woman returns and begins asking questions... and discovers the story of a forgotten valley pioneer whose life becomes entwined with hers. But in looking into her own family's history she uncovers more than she ever expected - and what her mother hoped would always remain a secret... 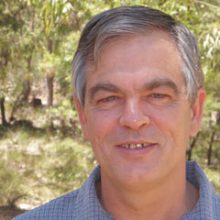 Steve Hawke grew up in Melbourne but found his way to the Northern Territory and then to the Kimberley as a nineteen-year-old in 1978. Captivated by the country, the history and the people, he stayed for almost fifteen years working for Aboriginal communities and organisations. He now lives in the hills outside Perth, but continues his strong association with the Kimberley, returning most years. His writings on the Kimberley include Noonkanbah: Whose Land, Whose Law (1989), the children’s novel Barefoot Kids (2007), the play Jandamarra that premiered at the Perth International Arts Festival in 2008 and toured the Kimberley in 2011, and A Town Is Born: The Fitzroy Crossing Story(2013). The Valley is his first novel for adults. 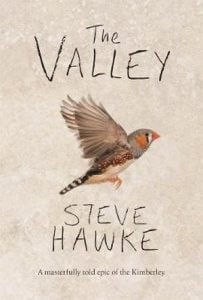 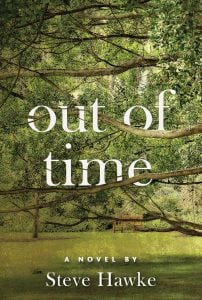