A thoroughly researched, beautifully wrought journey through the fascinating history of the real and mythical Timbuktu – and the modern day story of a brave librarian who saved a priceless collection of manuscripts from destruction. Charlie English pulls the threads of the past and the present, colonial forces and modern extremism, to create a compelling story of a city that has been both the object of Western fascination, and very little understood.

It’s 2012 in Mali, West Africa. And the famed city of Timbuktu is under attack by Al Queda rebels ‘advancing through the desert, driving government troops and refugees before them’. But librarian Abdel Kader Haidara was not fleeing the mounting chaos, instead he is driving toward what is starting to feel like certain death. But Haidara has a mission that’s bigger than one man’s life. He is responsible for the manuscripts of Timbuktu, its priceless literary past. And he is going to save them, whatever it takes.

Haidara’s extraordinary mission takes him across Africa, braving war zones, crossing borders, journeying by riverboat, donkey and camel – and traipsing through small villages and towns to find each a piece of the precious collection.

But once he manages to pull together this precious cargo, how can it be moved to safety? As Haidara reflects, shipping ‘tens of thousands of fragile documents out from under the noses the occupiers and across the desert carried huge risks, and not just for the documents.’ With the tally of beatings, rapes and killings growing daily, it seems an impossible task. And one with a breathtaking and moving resolution.

Charlie English uses Haidara’s great feat – itself worthy of any literary epic – as a mirror for the story of Timbuktu itself; a way into the complex and fascinating history of the Malian city that would become a Western obsession.

From waves of occupation, plundering, war, adventure, religion and slavery, all intertwined with the legends created in the minds of the 18th and 19th century Western explorers, for whom Timbuktu became Africa’s El Dorado. A place where houses were covered in gold, and from which imaginary explorers could still bring back the greatest of curiosities.

English pulls in fact and fiction, truth and fable – to create a moving, intelligent and devastating picture of a city that may have been broken by war and occupation, but whose history was literally pulled from the rubble by those who knew its worth. A jaw-dropping tale about true cultural value of books. And why the world will always need heroes like Hiadara, who understands their worth. A highly recommended read.

Charlie English is the former head of international news at the Guardian. A fellow of the Royal Geographical Society and author of a previous book, The Snow Tourist, he first journeyed to Africa at nineteen, and has travelled widely there and elsewhere around the globe. He lives in London.

Grab a copy or start reading the opening pages here!

Opening Pages of The Book Smugglers of Timbuktu by Charlie English 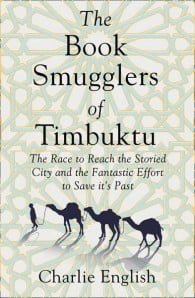 To Westerners, the name “Timbuktu” long conjured a tantalising paradise, an African El Dorado where even the slaves wore gold. Beginning in the late eighteenth century, a series of explorers gripped by the fever for “discovery” tried repeatedly to reach the fabled city. But one expedition after another went disastrously awry, succumbing to attack, the climate, and disease. Timbuktu was rich in another way too. A medieval centre of learning, it was home to tens of thousands of ancient manuscripts, on subjects ranging from religion to poetry, law to history, pharmacology, and astronomy.When al-Qaeda–linked jihadists surged across Mali in 2012, threatening the existence of these precious documents, a remarkable thing happened: a team of librarians and archivists joined forces to spirit the manuscripts into hiding. Relying on extensive research and firsthand reporting, Charlie English expertly twines these two suspenseful strands into a fascinating account of one of the planet's extraordinary places, and the myths from which it has become inseparable.About the AuthorCharlie is the former head of international news at the Guardian and author of 'The Snow Tourist'.

Charlie is the former head of international news at the Guardian and author of 'The Snow Tourist'. 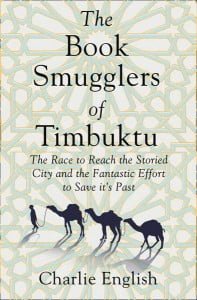