The Scandalous Life of Sasha Torte by Lesley Truffle: A wonderful new treat 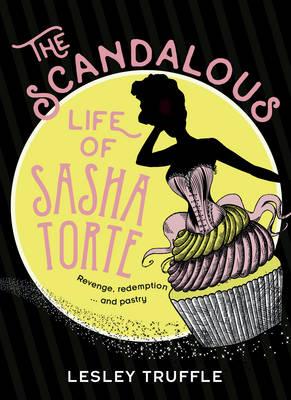 Sasha Torte is locked up in jail – for murder – but that doesn’t stop her living in luxury and running her world-famous pastries from her cell. Set in 1912, written from the perspective of a 22-year-old heiress with a troubled past and even more troubled future, Lesley Truffle’s The Scandalous Life of Sasha Torte transports us back in time to a world of criminals, servants, sex, love, and humour.

Featuring a range of characters that will have you laughing out loud, Sasha introduces us to sassy and smart women, handsome and dangerous men, a psychic goldfish, ghosts, jail members, and, of course, herself, in a fantastical, but completely unconventional always-look-on-the-bright-side memoir. Did I mention the amazing confectionary and pastries? The Scandalous Life of Sasha Torte is fast-paced, enormous fun and pulls at the heart strings, all at the same time.

Since we loved The Scandalous Life of Sasha Torte so much we had to find out more. In the following interview we spoke to Aussie gem Lesley Truffle about the development of her quirky yet powerful characters, what’s up next for her and (of course) everything baking:

BR: There are so many interesting and quirky characters in The Scandalous Life of Sasha Torte: from her lovers to the servants, prisoners, and even Alphonse the pet fish. Did you have a favourite to write, and if so, why?

LT: My favourite character is the infamous Sasha Torte herself. I’ve known her a long time. She began life in a play I wrote, and then evolved into the main protagonist in my second novel. Sasha is clever, irreverent, capricious, sensual, witty and courageous. She frequently indulges in risky behaviour but she’s got a strong moral compass and is the first to laugh at her own conceits and foibles. Even when she’s at her absolute worst I feel for her. Sasha survived a rotten childhood, raised herself in a corrupt Tasmanian harbour town, and at the age of seventeen overcame the odds to successfully establish her own glamorous cake emporium. Sasha’s extremely fond of champagne and she likes nothing better than a few chocolat bouchons washed down with champagne. I hold Sasha personally responsible for the indiscreet quantity of champagne I imbibed as I wrote her tale.

With Sasha being a pâtissier, pastry and baking is a huge part of the book. Not to mention her name is the most famous chocolate cake in the world today (Sachertorte). What was your inspiration behind the pastry theme within the novel?

The idea of Sasha Torte being a pâtissière came to me soon after I saw a fringe theatre production that involved an obscenely large spoon. The wooden spoon haunted me and I kept wondering who might else might use such a marvellous spoon. Inspiration came to me when I was waiting to be served in a very chic cake shop and couldn’t take my eyes off a glossy chocolate Sachertorte (invented by an Austrian apprentice pastry chef, Franz Sacher, in 1832). I decided that the owner of the spoon should be a Miss Sasha Torte – a world famous Tasmanian pâtissière. Once I’d decided on Sasha as the central character, details about her family, the denizens of Wolfftown and Sasha’s wild tale evolved quite quickly.

Are you a big fan of baking yourself? What’s your favourite thing to make?


I adore baked goods! – but I’m a failed pastry chef. Fortunately, I can blame this on the dodgy electric oven in my rental. It heats the kitchen more efficiently than it ever bakes. The oven fails to achieve the essential temperatures required for cakes, breads and pastries and is in the habit of scorning my best efforts. I would love to be whipping up Sasha’s famous croquembouche, chocolat bouchons and Coeur de crèmes but instead I’m reduced to making meringues simply because the slow oven suits them. I make mine the size of chubby grapefruits and then slather them in whipped cream and fresh summer berries. They are delectable washed down with premium champagne.

And strangely enough, once you conquer meringues – or what we Australians call pavlova – your guests will incorrectly assume you’re just being modest and are in fact a highly skilled pâtissière.

The book is set in a small coastal town and prison in Tasmania in 1912. What was your research and writing process?

Initially I read up on the Victorian and Edwardian eras in Australia and Tasmania. Primary sources involved newspaper archives and government and police reports. To obtain insight into how people behaved and spoke in the early twentieth century I consumed biographies and literature written in the era and discovered some wonderful novels.

These included Australian authors such as Catherine Martin and Henry Handel Richardson (Ethel Richardson). I also looked at American and European writers such as Edith Wharton, Saki, Max Beerbohm, Emily Post and the sensational Mrs Elinor Glyn who wrote Three Weeks. This book was the Edwardians version of Fifty Shades of Grey and it shook their world. It’s an exceptionally tame read by today’s standards but in 1907 it was deemed perverted, shocking, melodramatic, pornographic and immoral.

I also made two road trips to Tasmania and became fascinated by what’s called the shipwreck coast on the wild, wild West coast. In the wilderness area I took a trip in the vintage steam train and sailed down the Gordon River. Chatting with locals gave me insights and ideas for the novel. And so it was in the wilderness area that I decided to build the fictitious Wolfftown – a town founded on all the known vices.

Sasha Torte is a strong, openly sexual, witty woman. Seen as a woman before her time, she’s inspiring despite being a ‘murderess’. How did you come up with the character of Sasha Torte, and what do you want readers to take away from her?

Once I’d named my protagonist Sasha Torte – in homage to an Austrian gateau – the rest of the story fell into place. Sasha’s character is divided in that she is both angel and devil. But let’s not forget there’s a lot of fun to be had in dancing with the Devil. I believe that good and evil are reliant on each other, in a similar way that death is crucial to the regeneration of life.

Sasha is a young woman who loves to be loved and she adores sex. By her own admission, she’s a slave to her rampant sexuality. Sasha is prone to outrageous behaviour when she lets her guard down or is blindsided by illicit substances and primal fears.

I used some of my own childhood experiences to shape Sasha’s character. For it is her punishing childhood and the unconditional love she later receives that determines her strong character.

Primarily I hope that my readers are transported and have a good time. And that they are bemused and interested by what drives Sasha (I’m trying to avoid spoilers here!). Hopefully the readers will also identify with the essential humanity of the deviants, courtesans, hell-raisers, reprobates and criminals of Wolfftown.

Who are some contemporary Australian novelists that you admire?

What’s up next for you?

In my first novel, Hotel du Barry I set the story in a luxurious London hotel and many of the events that followed were triggered by WW1. I’m still fascinated by the Belle Époque and World War 1. In my current manuscript I’m particularly interested in the impact of WW1 on both Australian and European civilians.

However, it won’t be a war novel, or a dire tragedy! It will be in the comedic-tragic style of The Scandalous Life of Sasha Torte.