‘All Dora Judd ever told anyone about that night three weeks before Christmas was that she won the painting in a raffle.’

The greatest attraction of Tin Man by Sarah Winman is that it’s populated by characters who find it supremely difficult to live in the modern world, and in that way – and arguably like all great literary novels – it isn’t driven solely by plot.

Instead, Winman enters the minds of her characters with a perceptiveness and sensitivity usually found in the classics section of the bookstore. In a world dominated by fast-paced entertainment, abbreviated social media, and bigger-than-life blockbuster films, there’s something refreshing about the romanticised change of pace of Tin Man. Even when things are mundane, they are fascinating. Her characters could be people you meet tomorrow – heartbroken, lonely, but also resilient and kind.

The story begins in 1950 with Dora Judd winning a painting in a local raffle, and in an act of fed-up defiance, she chooses it over a whisky bottle that her husband Leonard would much rather win. Back at home, enraged Leonard tries to strip the painting off the wall, and as Dora puts herself between him and the painting it becomes a battleground for their dissolving marriage.

Jump to 1996, and their son Ellis Judd works at the Paint Shop, pulling long, meaningless hours, all the while wondering where his life has gone. It feels empty ever since his wife

died in a car accident, five years ago. He drinks in order to keep her ghost from haunting him. Disaffected and lonely, Ellis trawls through memories of his mother and her treasured painting Sunflowers, a Van Gogh copy, and how she clung onto it even as she approached a premature cancerous death.

Both Judd boys, Ellis and Michael, have a complicated relationship to begin with – so when Annie enters their lives she twists the fates of everyone into unthinkable directions . . .

Although Ellis’ life is plagued by loss and he finds it evermore difficult to move on from the tragedies of his past. More than anything else, Winman knows how to evoke a wholesome emotional portrait of her characters. She is a great surveyor of human behaviour. In a way, this book is far more hypnotic than her debut, When God Was A Rabbit.

We couldn’t put it better than Inga Simpson who said of this novel: ‘I feel as if I have lived these characters’ lives, and through them, experienced the most profound beauty and pain of love – and life.’

The renowned book reviewer James Wood once said about Karl Ove Knausgaard’s writing ‘even when I was bored, I was interested.’ Sarah Winman’s writing reflects this sentiment precisely, not in the sense of it being a boring story; more in the spirit of her artistic devotion to portraying everydayness with grandeur, bringing out the heartache that is submerged beneath the mundane.

Sarah Winman grew up in Essex and now lives in London. She attended the Webber Douglas Academy of Dramatic Art and went on to act in theatre, film, and television. She has written three novels, When God Was A Rabbit, A Year of Marvellous Ways, and Tin Man. 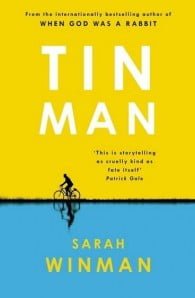 It begins with a painting won in a raffle: fifteen sunflowers, hung on the wall by a woman who believes that men and boys are capable of beautiful things.And then there are two boys, Ellis and Michael,who are inseparable.And the boys become men,and then Annie walks into their lives,and it changes nothing and everything.Tin Man sees Sarah Winman follow the acclaimed success of When God Was A Rabbit and A Year of Marvelous Ways with a love letter to human kindness and friendship, loss and living.About the AuthorSarah Winman grew up in Essex and now lives in London. She attended the Webber Douglas Academy of Dramatic Art and went on to act in theatre, film and television. She has written three novels, When God Was A Rabbit, A Year of Marvelous Ways and Tin Man. 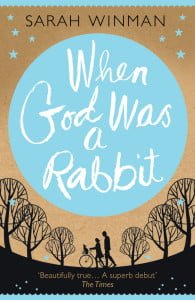 When God was a Rabbit 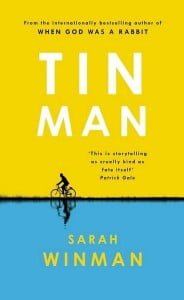