Vicious Circle has readers engrossed from the first page. It has everything you could want: sharp, well-drawn characters, crystalline prose and a narrative that winds more and more tightly, until it’s coiled to spring an explosive conclusion. It’s easy to see why CJ Box is a New York Times bestseller.

Game Warden Joe Pickett is out of his comfort zone: flying low in Cessna over thick forest in search of missing hunter, Dave Farkus, when he would much rather be doing a ground search on horseback. But discomfort quickly turns to horror as he and the rescue crew witness what appears to be a cold-blooded murder.

Unable to clearly make out the victim and perpetrators, Joe is convinced that Dave Farkus is dead. And Dallas Cates must have something to do with it. Just like two years ago, when his daughter April was found badly beaten, Joe was sure Dallas had been the culprit. The notorious Cates clan had paid dearly for that. Joe’s quest for revenge had led to a devastating confrontation that left three of Dallas’ relatives dead. But Dallas himself never paid for the crime. Instead, he was jailed for a trumped up misdemeanor. Now he’s out. And there’s no telling what he has already done – and what he’ll do next.

CJ Box masterfully conjures the deep Wyoming wilderness. But the wild beauty and wintry, forest landscapes offer more than a mere backdrop to nail biting action. The disquiet of an isolated hunting cabin, ‘three quarters up the face of a mountain’, where phone contact is intermittent at best, makes for both the ideal hideaway, and a chilling setting for what’s to come.

Joe Pickett, astride his steed Toby, retains a sense of the flawed heroes of old Westerns, but with a believable modern sensibility that makes this at once a timeless show down and an utterly fresh thriller that is guaranteed to grip even the most jaded readers.

The ‘vicious circle’ that Joe has set off with his pursuit of the Crates, pulls the readers effortlessly into a complex multi-book narrative that requires no awkward ‘backstory’ set up. Instead, the action is described with economy and neatness. Exposition is kept to a minimum. But still manages to catch readers up on past Joe Pickett tales sufficiently enough, that Vicious Circle can be read both as a stand-alone book, or a satisfying new installment.

Either way, once you’ve entered the Wyoming wilderness with Joe, you will want to make the journey again and again. CJ Box is a sharp, compelling writer. And one to recommend to reluctant readers and thriller devotees alike.

CJ Box is the author of 21 novels, which have been translated into 27 languages. He is a Wyoming native and has worked as a ranch hand, surveyor, fishing guide and small town newspaper reported. In 2016, he was awarded the Western Heritage Award for Literature by the National Cowboy Museum. Vicious Circle is the 17th book in the Joe Pickett series. 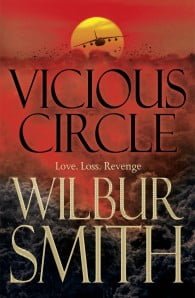 Love. Loss. Revenge.When Hector Cross's life is overturned, he immediately recognises the ruthless hand of an enemy he has faced many times before. A terrorist group has re-emerged - like a deadly scorpion from beneath its rock.Determined to fight back, Hector draws together a team of his most loyal friends from his former life in Cross Bow Security, a company originally contracted to protect his beloved wife, Hazel Bannock, and her company, the Bannock Oil Corp. Together, they travel to the remotest parts of the Middle East, to hunt down those who pursue him and his loved ones.For Hazel and Hector have a child, a precious daughter, who he will go to the ends of the earth to protect. And brutal figures from the Bannock family's past - thought long-gone - are returning, with an agenda so sinister that Hector realizes he is facing a new breed of enemy. One whose shifting attack and dark secrets take Hector to the heart of Africa and to a series of crimes so shocking they demand revenge. 'The exciting action scenes and larger-than-life characters...will appeal to a broad range of thriller fans.'  Publishers Weekly