During the summer holidays, everybody needs a bit of Evanovich in their lives. Hardcore Twenty-Four, the latest Stephanie Plum novel in the famous, bestselling series, is the usual rowdy, saucy fun. Star of the series is Stephanie Plum, a love-torn, incompetent bounty hunter heroine who investigates light-hearted and sometimes bizarre, comedic mysteries in the books that are told in first person and stylised to imitate the quick-fired one-liners of American TV sitcoms such as Seinfeld.

If you haven’t yet had the pleasure of meeting Evanovich’s most famous heroine, allow us to introduce likeable Stephanie, former lingerie buyer from Trenton, New Jersey, who becomes a hapless bounty hunter to make ends meet after losing her job.

The novel begins with Stephanie receiving a call from police officer/love interest, Joe Moretti, who is totally spooked by all the headless corpses popping up across Trenton. Looks like someone has been sneaking into the morgue and chopping off the heads of the dead. Pretty weird.

A local gravedigger is dismissed as deranged when he claims that there are zombies ravaging the town. He’s seen them himself, or so he claims.

Stephanie Plum snoops around looking for the culprit, wondering whether the macabre – and yet so far innocuous – decapitations are a kind of sick prank by some unhinged renegade. At first, it seems they may be nothing more than the product of some zany zombie-phobia sweeping the town.

Then Diesel, a six-foot, tanned beach-bum who has been entering and leaving Stephanie’s life as he pleases, appears out of the blue, wanting to stay at Stephanie’s home and help her investigate. Mysteriously, he’s evasive about his true reasons for being there. Stephanie, who doesn’t need this handsome temptation, wonders how long she can resist him.

But it doesn’t take long for Joe and Stephanie to find a headless body behind a hardware store. A homeless man has been gruesomely murdered. Joe feels like he’s getting closer to identifying the murderer. There’s one problem, however: he’s found more heads than bodies, and the death count keeps growing. It only gets worse when the bizarre zombie superstition gains traction, because not only are decapitated heads showing up all over town, they’re also missing their brains. There must be a logical explanation for this – right? That is until they see what appears to be a zombie in the flesh.

For the entire series, Stephanie has been caught in a classic love triangle between Joe Morelli, former bad boy turned vice cop, and Ranger, a high-powered security consultant who has his own plans for her. While the investigation is underway Stephanie tries valiantly not to become romantically involved with either dashing man. But this time around, it’s harder than ever before. Oh, Stephanie. She has too many men in her life. And then she’s asked to babysit a boa constrictor called Ethel.

Last but not least, there’s Grandma Mazur, Stephanie’s hilarious, tough-talking, funeral loving Grandma who’s has gone on-line and found romance – but who really is her latest paramour? Does Stephanie and her mother need to worry?

Hardcore Twenty-Four is vintage Evanovich. Reading’s equivalent of popcorn – delicious and laugh-out-load funny, easy and addictive. Perfect for the holidays.

Janet Evanovich is a prolific American author who began her career writing short contemporary romance novels under the pen name Steffie Hall, but gained fame with a series of contemporary mysteries featuring Stephanie Plum. She has also written the Fox and O’Hare series, the Lizzy and Diesel series, the Alexandra Barnaby novels, and How I Write: Secrets of a Bestselling Author. 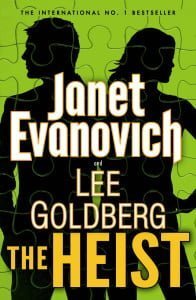 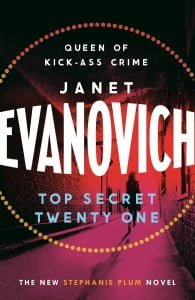 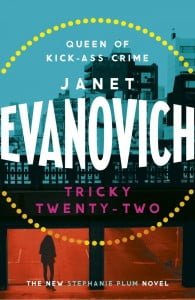 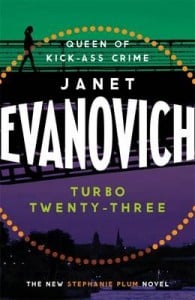 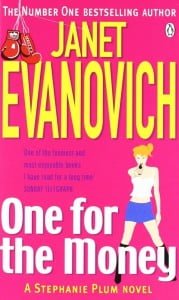 One For the Money 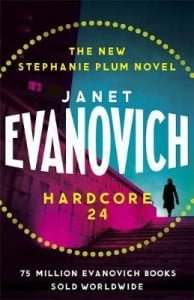