Richard Denniss, the Chief Economist of The Australia Institute, talks to Cheryl about about politics and economics, and what Australia will look like post COVID-19. Dr Richard Denniss is the Chief Economist and former Executive Director of The Australia Institute. He is a prominent Australian economist, author and public policy commentator, and a former Associate Professor in the Crawford School of Public Policy at ANU.

Denniss has regular columns in the Australian Financial Review and the Guardian as well as writing regular essays for The Monthly. He publishes regularly in academic journals and has written 6 books including: Affluenza: When Too Much is Never Enough (with Clive Hamilton), An introduction to Australian Public Policy (with Sarah Maddison), Minority policy: rethinking governance when parliament matters (with Brenton Prosser) Econobabble: How to Decode Political Spin and Economic Nonsense, Curing Affluenza: How to Buy Less Stuff and Save the World, and the June 2018 Quarterly Essay,Dead Right: How Neoliberalism Ate Itself and What Comes Next.

He has been described by Mark Kenny in the Sydney Morning Herald as “a constant thorn in the side of politicians on both sides, due to his habit of skewering dodgy economic justifications for policy”. 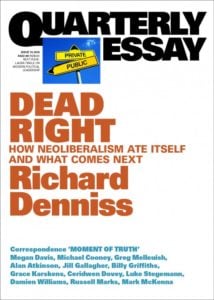 Check out his Quarterly Essay here.

Check out Dead Right: How Neoliberalism Ate Itself and What Comes Next here.

Dr Richard Denniss was until recently the head of the Australia Institute, and is now its chief economist. He has spent the last twenty years moving between policy-focused roles in academia, federal politics and think-tanks. He is co-author of Affluenza and Minority Policy, the author of Econobabble, and writes regularly for the Australian Financial Review, the Canberra Times and the Monthly. 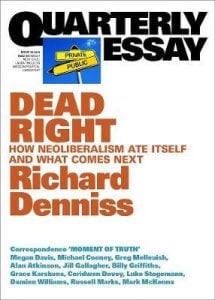