The Making of a Larrikin Actor: Start reading Steve Bisley’s poetic memoir All the Burning Bridges 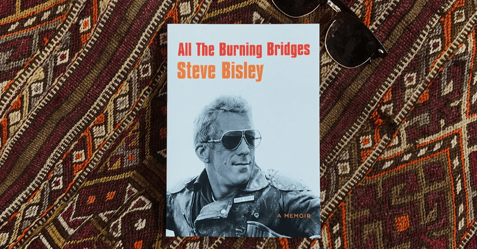 Why we love it: Steve Bisley is a famous actor who has built quite a reputation as a poetic memoirist. The star of films such as Mad Max and the TV series Water Rats, Bisley has again confirmed his considerable talent as a writer with his new book, All The Burning Bridges. With gruff, larrikin humour, and remarkable candour, Bisley recalls his formative years in Sydney during the rollicking 1960s with this classic rags to riches story. With his trademark wicked humour, astute observations, he writes effortlessly, sifting through memories as he delivers a kaleidoscopic view of a young man’s transformation into one of Australia’s most recognised actors.

In our podcast The Stories Behind the Story, Steve revealed how he ended up becoming a writer. He was carrying around handwritten pages in his backpack, Kerouac-style, and one night when he was having dinner at a writer friend’s house, she asked to see them. In his backpack she discovered the crinkled up and ragged pages that would would be the seed for his runaway bestseller and acclaimed first poetic memoir, Stillways. Published in 2014, it was shortlisted for The NSW Premier’s Literary Awards, The National Biography Awards, and The Queensland Literary Awards.

All the Burning Bridges begins with Steve at age seventeen standing beside a highway in December 1967, trying to hitchhike from his country NSW town to Sydney. Eventually he makes his way to a share house in Rhodes near the Parramatta River, where he lives with ten other men. Without any real prior experience he applies for NIDA in Sydney – and, incredibly, is admitted, despite the fierce competition of already established actors.

At NIDA, he finds his tribe, swept up by a variety of personalities along the way. ‘We threatened engineering students with a beating when we heard them call us NIDA poofters,’ Bisley writes candidly. ‘We stole drinks at the student bar on the main campus, we hit on everything that was halfway pretty, and we kept each other’s cars going with bits of wire and stolen petrol.’

It doesn’t take long for Bisley to befriend fellow actors Mel Gibson and Judy Davis. On the day of their graduation, Mel and Steve are cast in the iconic Aussie film Mad Max, an opportunity that causes their lives to shift gears in ways neither of the naïve, hopeful young men could ever imagine. What comes along with his success is the haze of fame and good fortune and the hedonistic lifestyle, and an impulsiveness that ended up haunting and defining the man Bisley is today.

Not only is Bisley’s memoir a candid look back into the actor’s prolific career, it’s also a time portal for bygone Sydney: party-soaked Kings Cross and the bohemian days of Darlinghurst and the vibrant, libertine nights of Oxford Street all bundled together with fondness. He writes with the cut-throat economy of dirty realism with a punch of carefree grunge that makes for immersive reading. Writing that suits the time, in other words.

Although the memoir ostensibly follows on from Stillways it can be read as a standalone, and we recommend it for anyone who loves reading about how a young country boy made his dream come true – and had a lot of fun along the way.

Grab a copy || Listen to our podcast 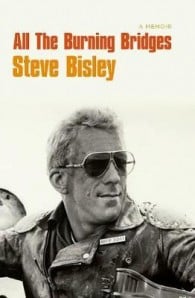 The sequel to Stillways, Steve’s acclaimed first memoir. Wine bars and strip clubs. Girls with flowers in their hair. Lust, and the best music the world has ever heard.A thousand steps from the farm to the blue black highway, the adventure continues... In the sequel to his highly acclaimed first memoir Stillways Steve Bisley lands smack dab in the middle of Sydney. It’s 1966. High waisted bell bottom pants, paisley body shirts, velvet jackets, platform shoes and a lust for everything life has to offer him. And it offers him a lot.From cadet graphic artist to private eye, lover, fighter, dreamer, milk man, truck driver and everything in between and then some. Till the day he auditions for the acting course at The National Institute of Dramatic Art and to his dismay is accepted, along with fellow classmates, Judy Davis and Mel Gibson. Three years later, on their graduation day, Mel and Steve are cast in a film that will change their lives forever. The Iconic Australian cult film Mad Max.In this sensory and poetic memoir, actor Steve Bisley reflects on loving, losing, wrecking and running – the bridges burned – in the decades since hitchhiking away from the small family farm on the central coast of NSW in the 1960s. He explores with confronting honesty what it is to live on the edge of uncertainty, regret, despair and depression as an actor, lover and father, a life held together at times “by bits of frayed cotton and Perkin’s paste and hope”.In 2014, Stillways was shortlisted for The N.S.W Premier’s Literary Awards, The National Biography Awards and The Queensland Literary Awards.About the AuthorSteve Bisley has been a film and television actor for more than 30 years, best known for his roles in Mad Max and The Great Gatsby and as Detective Jack Christy in the long-running television series Water Rats. He has most recently played Jim Knight in the popular Nine Network drama Doctor Doctor. 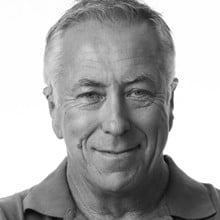 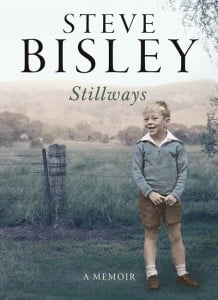 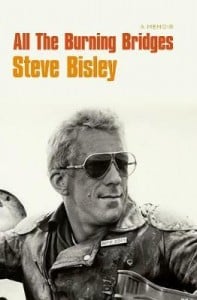