A Heart-Stopping Thriller: Read an Extract from The Deep by Kyle Perry The boy gasped for breath, hair in his mouth, before the next wave slammed him back against the bottom. He tumbled, the fizz of bubbles around him. Back to the surface. Another desperate breath. Stinging eyes searching for land. In the pre-dawn light the ocean was a roiling
grey, the dark gumtrees so close…

Knocked under by another wave, bull kelp tangling around his limbs. He clung to it as the current sucked him away from shore. His hands were so cold he couldn’t grip the kelp, but he wrapped slick loops of it around his wrists, adrenaline and fear giving him strength.

The water receded in a rush of whitewash and for a moment his head and torso were above the water.

A crash and he was under again. He held his breath, wrists locked in the kelp, until the rushing water had passed.

Above the sound of the wind and the waves, a dog barked… What Crimes Lurk in the Deep? Read our Review of The Deep by Kyle Perry 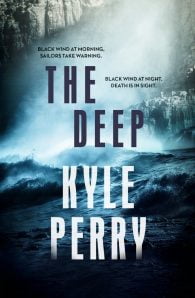 Kyle Perry is a drug and alcohol counsellor based in Hobart, Tasmania. He has grown up around the Tasmanian bush and seas, with the landscape a key feature of his writing and his spare time. He loves the sea, and his entire leg is covered in ocean tattoos. His debut novel, The Bluffs, has been translated into five languages. It was shortlisted for the Dymocks Book of the Year and the Indie’s Debut Fiction Book of the Year, and was longlisted for the Australian Book Industry Awards’ General Fiction Book of the Year. 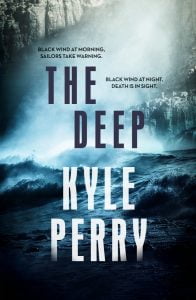