A Magical Journey: Read an Extract from Midnight in Everwood by M.A. Kuzniar Marietta Stelle’s mother always said that nothing good came of a rainy day. However, it was a rainy day when the magic came, and once magic has entered your life, you stay in its glittering clutch forever.

A mysterious new neighbour – who Marietta would later come to learn went by the name of Dr Drosselmeier – heralded the arrival of magic and wonder in her life. Though he appeared to be but an ordinary man, enchantment clung to him. It dripped from his voice, seeped out from under his skin and whispered around his eyes.

Marietta was dipping in and out of pliés at her ballet barre when she happened to glance out her window and witness his entrance. A black town hat bobbed along the cobbled street below. The cloaked figure carried a single case, pausing to look up at the sprawling townhouse Marietta called home. He seemed to look straight through her, so Marietta took a step back from the window to study him from a more covert position: his face was clean-shaven, fair and younger than one would expect, considering the sweep of silver hair peeking out from beneath his hat. Creases burrowed into the skin at the corners of his eyes, marking him as a gentleman in his late thirties perhaps, and his irises were an intense frosted blue, lending him a bewitching stare…

Buy a copy of Midnight in Everwood here. A Marvellous Retelling of The Nutcracker: Read Our Review of Midnight in Everwood by M.A. Kuzniar 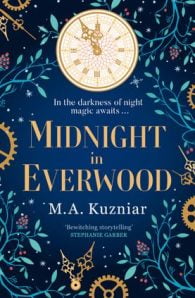 In the darkness of night, magic awaits… Nottingham, 1906Marietta Stelle longs to be a ballerina but, as Christmas draws nearer, her dancing days are numbered – she must marry and take up her place in society in the New Year. But, when a mysterious toymaker, Dr Drosselmeier, purchases a neighbouring townhouse, it heralds the arrival of magic and wonder in Marietta’s life.After Drosselmeier constructs an elaborate theatrical set for her final ballet performance on Christmas Eve, Marietta discovers it carries a magic all of its own – a magic darker than anyone could imagine. As the clock chimes midnight, Marietta finds herself transported from her family’s ballroom to a frozen sugar palace, silent with secrets, in a forest of snow-topped fir trees. She must find a way to return home before she’s trapped in Everwood’s enchanting grip forever.In the darkness of night, magic awaits and you will never forget what you find here… 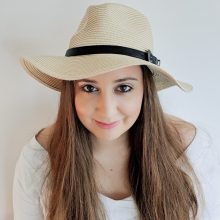 M.A. Kuzniar spent six years living in Spain, teaching English and travelling the world which inspired her children’s series The Ship of Shadows. Her adult debut novel Midnight in Everwood was inspired by her love of ballet and love of The Nuctracker. She lives in Nottingham with her husband.

Books by M. A. Kuzniar 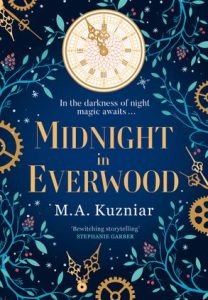