Adventure and magic in a delightful new series: Review of Scary Mary and the Stripe Spell: Monty’s Island 1 by Emily Rodda Monty is an adventurous boy who lives on a small island with his loyal companion Tawny the Fearless Lion, Clink the Shipwrecked Pirate Parrot, Bunchy the elephant Magician, Silent Sir Wise (an owl) and Marigold who runs the island café. Together they must foil the dastardly plans of Scary Mary and her pirate crew who want to take over Monty’s Island.

In doing so, there are various escapades involving a magic wand that washes ashore, buried treasure, the islands resident monster, the very hungry Jinglebees and a stripy spell that goes horribly wrong. Will Monty come up with an idea to get his friends out of trouble, or will the pirates have their evil way?

Readers will enjoy getting to know the characters, as each reveals their hidden talents and personalities. Not all are completely lovable, and some are downright mean and nasty but author Emily Rodda ensures that generosity and a sense of community win through every time.

Lucinda Gifford’s delightful illustrations are generously scattered throughout the book, helping us imagine Monty’s Island and the characters we meet.

This book is an excellent choice to read aloud with plenty of scope for pirate sounds and other fun noises to be inserted by the reader or listeners. I particularly enjoyed the magical, fantastical words of the spells that Bunchy casts with the newly found wand and found myself reading them aloud just to relish the spoken incantations rolling off my tongue.

At a time when we are all isolated as family groups, it is easy to imagine ourselves in Monty’s shoes so we can discuss the themes of resourcefulness, generosity, forgiveness and co-operation found in this adventure story.

Emily Rodda is a prolific Australian author, who has won the Children’s Book Council of Australia’s Book of the Year Award for Younger Readers six times. Emily is best known for the Deltora Quest series and the Rowan of Rin series which were loved by readers 8+. Emily has written the Monty’s Island series with younger readers in mind and I would recommend this series for readers 6+.

Emily has already planned two other adventures for Monty, which will be released in August 2020 and January 2021. I am sure they will be eagerly awaited by young readers, parents, teachers and librarians, as Emily Rodda has created a wonderful world of interesting characters that will fuel imaginations and inspire children to have fun reading. 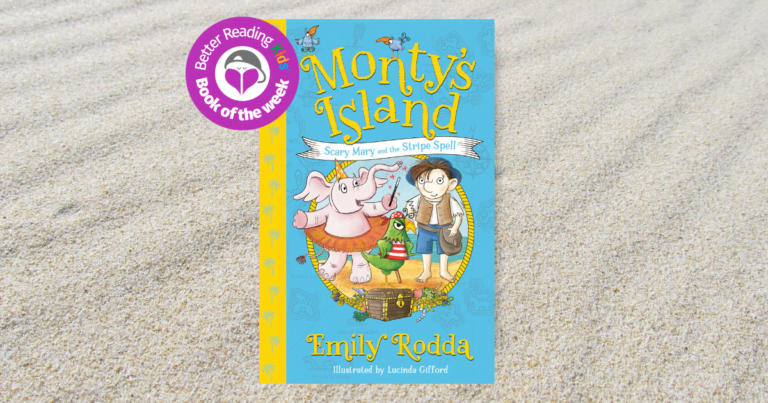 Monty lives on a perfect island in the middle of a magical sea. Sometimes the sea throws up something interesting … and Monty goes on an amazing adventure!

On a tiny island far away, in a sea that ripples with magic, Monty never knows what he might find… Monty, Tawny and friends receive some startling news: Scary Mary and her pirate crew are on their way, looking for a new island to call home.What can they do? There's no way they can hide - especially when Bunchy accidentally turns the whole island stripy with her new magic wand.It's going to take one of Monty's best ideas to save them!An adventurous and delightful new series from beloved author Emily Rodda.