Author Leon Silver on the Process of Writing The Miracle Typist For more than thirty years I’ve struggled with Tolek Klings’ – my father-in-law’s – extraordinary Second World War memoir, wanting to convey it with the honestly and vividness with which it was told to me.

After hearing many fascinating snippets of his life as a Second World War soldier, we tried to record his story in order to put it into a book, but Tolek was uncomfortable with this process. It was too impersonal. So I switched to simply talking with him about his extraordinary time in the army, during the twenty-five years we spent together, both at work and within the family.

Tolek told his story to me feverishly, in episodes that were seldom chronological. Many nights we stayed back in the brightly lit factory showroom, sipping whisky. It was quiet and cozy, yet the brilliant lights seemed to highlight his memory flashes. It was almost as if we were isolated from the outside world in some wartime bunker.

To better understand the way Tolek Klings relayed his story to me you need to channel one of those old-fashioned ‘paparazzi’ flashbulb cameras. Sudden recollections surfaced, such as … FLASH … the confrontation with the French high-brass in Lebanon . . . FLASH. . . his political, academic, philosophical interchanges with Jan the war correspondent while on army manoeuvres . . . FLASH . . . the time they fraternised with the Germans and Italians when the desert flooded … FLASH … the good luck wedding blessing from the Rasputin like crazy Eliezer, that ushered Tolek’s miraculous battlefield escapes, described so vividly … FLASH … how he earned The Miracle Typist moniker.

Tolek would jump to his feet, waving his arms as he re-enacted the moments over and over – sometimes it felt like watching a video. Tolek would smoke, laugh and hoot, recounting his Armageddon deliverances.

And yet . . . I was to discover that most of his story had been sanitised for my consumption. It took Tolek many years to bring himself to tell me about the weight of being a Jewish soldier in the Polish army rife with anti-Semitism, and the on going pressure if to desert the defeated Polish army. Dump the uniform and try to make it back home to protect his wife and son.

Even longer, for Tolek to relay his time with the Modena Speakers and  his traumatic experience in the freezing forest after he was robbed at the start of the war. These episodes didn’t need flashbulb moments or re-enactment. There was no smoking, hooting and laughing. He could barely look at me when relaying those events.

One night, sitting in the quiet showroom, Tolek told me about these incidents. He hadn’t even told his wife and daughter. I could see – so clearly – that when he finished, his eyes became lighter. He no longer carried that weight – it was now firmly weighing down my shoulders. He was finally vindicated; he’d passed the baton on to me. Heartbreaking and Inspiring True Story: Read a Review of The Miracle Typist by Leon Silver 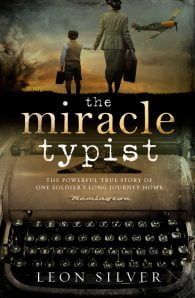 In the tradition of The Tattooist of Auschwitz, a heartbreaking true story of love, loss and survival against all odds during the Second World war.Conscripted into the Polish army as Hitler’s forces draw closer, Jewish soldier Tolek Klings vows to return to his wife, Klara, and son, Juliusz. However, the army is rife with anti-Semitism and Tolek is relentlessly tormented. As the Germans invade Poland, he is faced with a terrible dilemma: flee home to protect his family – and risk being shot as a deserter – or remain a soldier, hoping reports of women and children being spared by the occupying forces are true.What follows is an extraordinary odyssey that will take Tolek – via a daring escape from a Hungarian internment camp – to Palestine, where his ability to type earns him the title of ‘The Miracle Typist’, then on to fight in Egypt, Tobruk and Italy. A broken telegram from Klara, ending with the haunting words, ‘We trouble’, makes Tolek even more determined to find his way home and fulfil his promise.This heartbreakingly inspiring true story is brought vividly to life by Tolek’s son-in-law, Melbourne writer Leon Silver.

Leon Silver was born in Shanghai in 1941 to Polish Jews who fled their homeland in 1938. In 1948 the family moved to Israel, where Silver grew up before relocating to Melbourne in 1956. His first novel, Dancing with the Hurricane, was translated into Hebrew and published in Israel. The Miracle Typist is the true story of his Polish father-in-law, Tolek Klings. 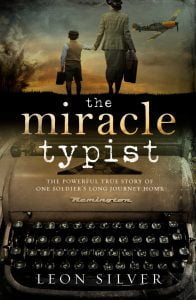