I was actually trying to write a very different type of book, more like a family memoir, when one night I had a dream that I was trapped in a cave at night. It was an extremely vivid dream and I remembered every detail when I woke up, which is very rare for me. Then the next night I dreamt of a different night in the same cave. And the next night. And the next. In the end this went on for over three weeks. By that time I found myself sharing the thoughts of the girl in the cave as if she and I were the one person, so I abandoned the other book (never to be picked up again) and found that Alix and her life were becoming clearer and clearer to me. The details of how she got there, who she was and her entire background gradually revealed themselves, as if my own memories were being revived. It was a very weird experience, as if there was a real girl called Alix who was entreating me to tell her story. So I did.

Because some of the areas covered in the book were subjects I had researched thoroughly already, the main research I needed to do was on human survival and recovery. I read every survival book I could find, and watched terrifying series of survival stories on TV, and also consulted medical researchers and doctors about what the human body could endure. I built up a library of reference books on bushcraft, and on the area around Wilsons Promontory in Victoria, including its local fauna. I had to look into details of some very distasteful crimes and weapons, which was fascinating in a nasty kind of way, but which I did not enjoy. Lastly, I referred to the resources I had used years ago to write a non-fiction book for secondary students called ‘The Geologist’, which followed the path of several different geologists, including a young woman of about Alix’s age, who had the kind of job I imagined Alix would have had.

I’ve had a long-standing interest in indigenous vegetation. In my previous house I planted a small urban forest with plants from the local indigenous nursery, and I belonged to a local group that organised indigenous plantings along the foreshore, including labels indicating which plants could be used for medical purposes, food or other uses like basket-making. I was also involved in the editing of a book on indigenous plants for suburban gardens, so that part of the research was mostly already done, although through these contacts I still had easy access to experts when I needed more specific details.

As a child I spent quite a lot of time confined to bed due to illness, and my main comfort was a set of Arthur Mee’s Children’s Encyclopedias, which I absolutely loved. (You will notice in the book that Alix loved them as well). They had the most stunning black and white photographs of various exotic countries, and I developed a lifelong dream of visiting Greenland, Iceland and Madagascar, all due to these photographs. I have managed to take an adventure cruise to Iceland and Greenland (the first tourist ship to go there), but sadly have never made it to Madagascar, although I have greedily read every book I could find about it, including the Lonely Planet guide for tourists. This has proved surprisingly useful as it covers history, flora and fauna, and local practices as well as where to stay and what to eat. Again, most of this research had already been done, and I had plenty of materials near at hand to refer to when necessary.

I once worked in a university with a number of published writers, and when I left to pursue a more writing-based life I asked them for advice. The most useful bit of advice for me was from a much-published and popular writer of fiction who said her routine was to write all morning without any interruptions – no phone calls, no visitors, no distractions of any kind – then treat the rest of the day as yours to do as you like. You might go on writing, you might do some research, or you might go out for lunch, or for a long walk, or read a book. In other words, morning work is compulsory, the rest of the day is optional.  Because I make an early start, this system works very well for me, although non-morning-people might want to reverse it, and work in the afternoons.

One practical piece of advice that has proved very useful is to take a pad of paper and a pencil to bed, for any ideas you wake up with during the night. So many of us have woken to the perfect poem, or the perfect ending, only to find we’ve forgotten it in the morning, so I heartily recommend this to all writers. I also keep a journalist’s notepad and pen with me at all times. If I’m driving myself any distance I leave it open on the passenger’s seat as I find long trips, especially in the country, are very conducive to creative thought. I have done a surprising amount of useful writing in motorway laybys.

My own personal bit of advice is that if you are ever troubled with writer’s block, there’s always the time-honoured remedy for academic assignment block. This only works if carried out the letter, and is as follows: Slowly drink two gin and tonics while eating an entire packet of corn chips. No more, no less. It’s only for use as a last resort, but it is guaranteed to break the blockage. Good luck!

My taste in books is quite eclectic. As far as literary fiction goes, I have just finished the third book in Hilary Mantel’s Wolf Hall series and thought it probably the best of all. As with Jane Austen, my favourite writer of all time, you scour Mantel’s work to discover her methods and techniques, but also as with Austen’s works, to quote Thornton Wilder: ‘The art is so consummate that the secret is hidden; peer at them as hard as one can; shake them; take them apart; one cannot see how it is done’. Another favourite is Joseph Conrad, and I have reread Nostromo many times, almost as often as the Lord of the Rings trilogy and Austen’s Persuasion, all of which I read pretty much annually as comfort reading necessary for my sanity.

I also love crime books, particularly if they have a female protagonist. Among my favourites are the Phryne Fisher books by Kerry Greenwood, the Kinsey Millhone books by Sue Grafton, and anything by Camilla Lackberg or Mary Wings. I also love a series of crime books by Ellis Peters set in fifteenth century England where the crimes are solved by Brother Cadfael, a Benedictine monk. And I’m a big fan of Aussie Noir, especially The Dry and The Lost Man by Jane Harper, and the Caleb Zelic books by Emma Viskic.

My daily routine is a bit unusual. I live in an extended family environment and since I and my grandson are both early risers by nature he and I have breakfast together every weekday before he heads off for school. Then each evening I have dinner cooked for me, so I have the day free to work on my writing or to carry out any necessary research. I also make sure I have a walk in the open air, often on the nearby beach, for at least half an hour but preferably longer, usually round about lunch time. This also provides me with thinking time, which is very important, as often when I’m stuck for ideas a walk in natural surroundings will provide the answer.

Until recently my daughter and her family lived in Europe. I made sure to visit them once a year for at least a month and each time I’d break this up with a trip on my own so we didn’t get tired of each other. I’m interested in seeing how people live, rather than sightseeing, so I found myself setting up little research projects to give a focus to these journeys. I began with visiting the international law centres in The Hague, followed by the venerable herbarium in Leiden, then became interested in a skating race held in an area just north of Amsterdam, which led to a visit to an ice-skating museum in the lovely lakeside town of Hindeloopen. I’ve kept detailed diaries of all my travels and used to reread them at times when I missed the family.

Now the family lives with me and I don’t have to relive those times, but I guess somehow the stories have all melded together and what has come out of that melding is a plot. So, at the time I was writing Beware of Dogs, I was also making notes for the next venture. This one is a bit different – more crime and less adventure, and the setting is international rather than insular – but again it’s about a young woman facing important decisions in her life, and also facing dangers coming from all directions and having great difficulty in working out who she can trust.

It’s in every way a story about skating on thin ice and I am perversely enjoying the tension that keeps building as I write. Isolated, Trapped, Hunted: Read an Extract of Beware of Dogs by Elizabeth Flann Your Preview Verdict: Beware of Dogs by Elizabeth Flann 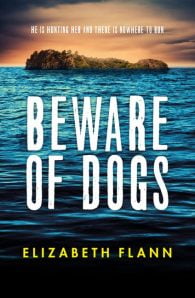 Winner of the 2019 Banjo Prize for Fiction She's isolated. Trapped. Hunted. An almost unbearably tense Australian survival thriller. Not much daylight left now. So begins the field diary of Alix Verhoeven, whose impulsive acceptance of an offer to spend Easter on a remote island has turned into a terrifying ordeal. Hiding in a tiny cave, she carefully rations out her meagre supplies, while desperately trying to figure out how to escape the men hunting her. She is determined not to be a victim. What do they want with her? She knows it's nothing good - she overheard enough on that first night to flee. But now she's got little food or water, no way of calling for help, and only her skills as an exploration geologist and memories of Atkinson's Bushcraft Guide to survive. By day she is disciplined and lives by strict plans, but at night she finds herself haunted by questions about her life that she has never wanted to face. And her time is running out. 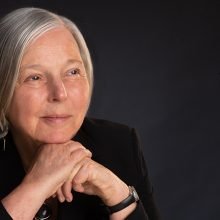 Elizabeth worked for over twenty years in the publishing industry before moving into tertiary education to teach editing, scriptwriting and literature to postgraduate students. She is the co-author of The Australian Editing Handbook, and completed a PhD in 2001 entitled Celluloid Dreaming: Cultural Myths and Landscape in Australian Film 1970-1990. Now retired from teaching, she is able to give full rein to her true love: writing fiction. This is her first novel. 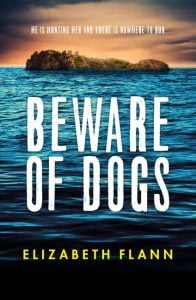