The house, a stately brick Colonial, stood at the peak of a grassy hill, the slope of its great rolling lawn dotted with graceful elms and sycamores, on the easterly side of the tiny seaside town of Kent Crossing, on the North Shore of Massachusetts.

Perched on high as it was, overlooking the beach on one side and the quiet and compact Main Street on the other, it gave the impression of omniscience, as though it were guarding something.

No wonder, Larisa thought. She hadn’t told anyone yet, but she’d come to prepare the house for sale. She’d taken the train up from Boston that day, Saturday, arriving early afternoon and walking with purpose through the center of town—Main Street being the only street that really constituted “downtown”— past Duffy’s Hardware, Antonio’s Italian Bakery, and Sunshine Cleaners on the left; St. John’s Episcopal, Shea’s Tavern, and the Little French Bridal Shop on the right, leading on to the two-pump service station, just before the rise in the road that led to Elmhurst.

Clutching the key the estate lawyer had sent her by FedEx, she had lingered for a moment in front of the trussed-up window of the bridal shop, taking in the puffed-up skirt and ivory satin corset of the showpiece dress, a mannequin’s hand splayed out to the side, her head tilted slightly up and back in a pose of effortless elegance… A Heartfelt Debut: Read our Review of The Little French Bridal Shop by Jennifer Dupee 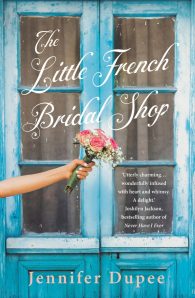 When Larisa Pearl returns to her small seaside home town to manage her beloved great aunt's estate, she's an emotional mess. Larisa has just lost her job and her boyfriend and she's struggling to cope with her mother's failing health. But as she walks past the bridal shop window, a beautiful ivory satin wedding gown catches her eye. Now, to the delight of everyone in town, Larisa is planning her wedding. She's bought the dress, made floral arrangements and set the date. The only thing she doesn't have is the groom. How did this happen? All she did was try on a dress and let her fantasy take flight. Lost in a web of her own lies, Larisa must first face some difficult truths, including her mother's fragile future, before she can embrace her family, straighten out her life and open her heart to finding love.

Jennifer Dupee grew up on the North Shore of Boston and is a graduate of Brown University, where she received her honors in Creative Writing. She is an active member of the Grub Street writing community in Boston and has published in The Feminist Press. She was a semi-finalist for the 2016 James Jones First Novel Competition and a semi-finalist for the 2016 Faulkner-Wisdom competition. Jennifer lives just outside of Boston with her family. She is currently at work on her next novel. 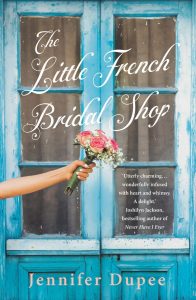