Confronting, Funny, Intelligent: Read an Extract From Born Into This by Adam Thompson Through the amplifying harshness of the megaphone, he sounded like a dictator. He turned to me. ‘Stand out, brother,’ he said, in the melodious yet gravelled tones of his natural voice.

In his day, stiff-legged Jack was a national leader and a balls-to-the-wall activist. He was our hero, really. Even in retirement, he is on the news every couple of weeks – agitating, pushing our interests. People around noticed he had singled me out, and a hand patted my shoulder. I felt important.

A chant rose from the front and it spread like a Mexican wave. Missing the first word, I broke in on the next. I could hear my voice, clearer than those around me – making me self-conscious. I wondered if the other chanters experienced the same effect. A fat man with slick hair and a business shirt leaned against a traffic pole, shaking his head and clapping his hands slowly. He yelled at us to ‘get a job’. Two police
motorcycles barricaded the intersection and a string of cars waited. A horn bleated.

A half-full plastic water bottle swung in my hand. Lifting the bottom of my protest shirt, I eyed the padded bulge in my pocket. And I shivered under the biting sun. You’re not going to chicken out, I told myself. The chink-chink of clap-sticks gave rhythm to the chant. The hypnotic metallic ring echoed off the shop facades and the townhouses facing the street. I bounced along on the balls of my feet for a few steps, looking over the banners and bobbing heads for the dancers I knew. Streaked in elemental paint, they broke away from the front and, bent low to the footpath, wove their way back through the opportunistic spectators, with their phone cameras and takeaway coffees. One of the dancers, from my hometown, carried a spear and feigned a throw at an old Chinese couple, who clutched at each other and giggled, not wanting to lose face.

A short woman with a jowled face approached me from the side. I knew her through the community. She was from up the coast. I had been observing her as she started conversations with other marchers. She was uninterested in the protest, but she was there. She was a number…

Better Reading acknowledges the support provided by Copyright Agency for us to promote Born Into This. Your Preview Verdict: Born Into This by Adam Thompson Identity and Heritage: Read our Review of Born Into This by Adam Thompson NAIDOC 2021: Learn More From Our Podcasts with First Nations Authors 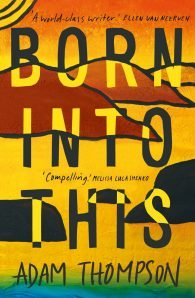 The stories in Born Into This throw light on a world of unique cultural practice and perspective, from Indigenous rangers trying to instil some pride in wayward urban teens on the harsh islands off the coast of Tasmania to those scraping by on the margins of white society railroaded into complex and compromised decisions. To this mix, Adam Thompson manages to bring humour, pathos and occasionally a sly twist as his characters confront racism, untimely funerals, classroom politics and, overhanging all like a discomforting, burgeoning awareness for both white and black Australia, the inexorable damage and disappearance of the remnant natural world 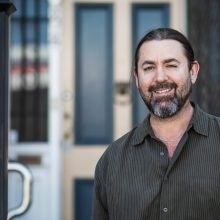 Adam Thompson is an emerging Aboriginal (pakana) writer from Tasmania, who writes contemporary short fiction. In 2016–17, Adam received writing awards through the Tamar Valley Writers Festival and the Tasmanian Writers and Readers Festival. Adam has been awarded a First Nations Fellowship at Varuna – The Writers House, several Arts Tasmania grants, and was one of ten recipients of The Next Chapter initiative through the Wheeler Centre. 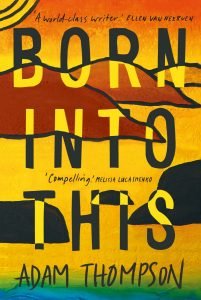