Cults, Twin Peaks and Small Towns: Read our Q&A with Nicola West, Author of Catch Us the Foxes Set in the bucolic seaside town I grew up in, Catch Us the Foxes is a gripping psychological thriller that follows a young journalist’s gruesome discovery at the town’s annual show. With national interest in the murder of the reigning showgirl growing by the day, the journalist must decide if she wants to help keep a dark secret or break the biggest story of her career.

The novel is inspired by my love of small-town murder mysteries (I’m obsessed with Twin Peaks), as well as my desperation to escape my former hometown and my experience as the daughter of a third-generation police officer. It also explores the horrifying yet well-documented rumours of ritualistic slayings that allegedly took place in the area’s sprawling rainforest (seriously)!

It feels strange to admit this, given the novel’s content, but the story is deeply personal to me—some may even say semi-autobiographical (minus the murder, of course)! In fact, prior to writing the novel, I was actually working on a memoir about my experience of developing a debilitating medical condition at the age of twelve and ultimately having to fight for my right to receive a medically necessary hysterectomy as a teenager. At its core, Catch Us the Foxes is the fictionalised version of that memoir.

It captures the same feeling I felt of being trapped in my hometown due to my health problems but in a heightened and distorted way—as if being viewed via a funhouse mirror. The story is peppered with my own memories (everything from being penpals with Ivan Milat to being trapped inside a ghost train when it blacked out) that blur the lines between fact and fiction. But, more than anything, the book captures how desperate a person can feel to get out of the place that shaped them and asks what they’d be prepared to do to escape.

I’ve always been a huge crime buff, so a lot of my research came from topics I’d already read about extensively—a lot of true crime revolving around conspiracies, the phenomenon of satanic panic, and modern-day cults.

I was also fortunate to be able to pick the brain of my (police officer) dad, who put up with a lot of dumb and weird questions over the course of writing the novel. He was also kind enough to walk me through precisely what would happen if I found a body at the local show and reported the finding to him—because sometimes you need to know the rules before you can break them.

It sounds incredibly cheesy, but you really have to find what makes your heart sing. I took a non-fiction writing course when I was writing my memoir and a guest author said that the writing process had to feel like a compulsion—like something you couldn’t live without. I remember being frustrated by that comment because it was so contrary to my own experience. But when I finally ditched the memoir and switched to the novel, I suddenly understood what she meant. Don’t be afraid to change things up and experiment with genres/styles until you find the one that resonates with you most. A Wonderfully Wicked Debut: Try a Sample Chapter of Catch Us the Foxes by Nicola West Deliciously Dark and Twisty: Read our Review of Catch Us the Foxes by Nicola West Podcast: Nicola West on Setting a Crime Novel in Her Hometown 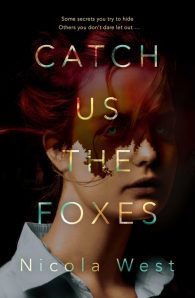 Some secrets you try to hide. Others you don’t dare let out. Twin Peaks meets The Dry in a deliciously dark and twisted tale that unravels a small Australian country town. Ambitious young journalist Marlowe ‘Lo’ Robertson would do anything to escape the suffocating confines of her small hometown. While begrudgingly covering the annual show for the local newspaper, Lo is horrified to discover the mutilated corpse of her best friend – the town's reigning showgirl, Lily Williams. Seven strange symbols have been ruthlessly carved into Lily’s back. But when Lo reports her grisly find to the town’s police chief, he makes her promise not to tell anyone about the symbols. Lo obliges, though it’s not like she has much of a choice – after all, he is also her father. When Lily’s murder makes headlines around the country and the town is invaded by the media, Lo seizes the opportunity to track down the killer and make a name for herself by breaking the biggest story of her life. What Lo uncovers is that her sleepy home town has been harbouring a deadly secret, one so shocking that it will captivate the entire nation. Lo’s story will change the course of her life forever, but in a way she could never have dreamed of. 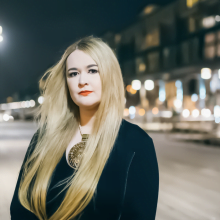 Nicola West is the daughter of a third-generation police officer and grew up in a bucolic coastal town in New South Wales. After moving to Sydney to pursue a career in journalism, she vowed to be as far removed from both her hometown and her father’s profession as possible—that is until she found herself writing a novel about both topics. In addition to being one of eight young writers chosen to take part in Express Media’s 2018 Toolkits: Fiction program, Nicola was also selected for the Australian Society of Authors’ 2019 Award Mentorship Program. She was a mentee of bestselling author Monica McInerney. Catch Us the Foxes is Nicola's first novel. 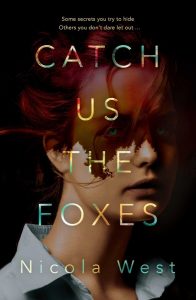 Catch Us the Foxes