Ellen Feldman Shares the Research Process Behind Return to Berlin Much like your previous book Paris Never Leaves You, Return to Berlin transports readers between two key historical moments – the height of WWII, and its aftermath. What research did you conduct to capture the atmosphere and details of these two historical moments?

I researched both these moments in time and the extraordinary settings in which they occurred as I do most of my books. I begin with general histories, move on to personal memoirs, and delve into newspaper and magazine articles of the era. I frequently explore archives as well, though that wasn’t necessary with either of these books. I did, however, interview a German-American woman who had lived in Occupied Berlin as a child and relied on a friend who was born in Germany, speaks the language, and knows the customs.

Then two serendipitous discoveries sent the novel hurtling in new directions. In a memoir of the period, I discovered that shortly after Kristallnacht, the student body, faculty, and administration of Bryn Mawr College, a small women’s college in Pennsylvania which just happens to be my alma mater, took up a collection to establish two scholarships for non-Aryan German girls. Clearly, Millie had to win one of those scholarships. For her experiences as an undergraduate, I relied on an oral history of some of the students who were there at the time. For the ambiance – what the campus looked and felt like, how the young women lived and learned and grew – I took a stroll into my own past.

My other surprising discovery involved a group of young Jewish men who had been born in Germany but managed to flee to America before the war. (When whole families could not get out, they sometimes managed to send one member, usually the eldest son.) At first these immigrants met with suspicion and rejection. The older ones might be spies. Even the youngest were viewed through the virulent lens of anti-Semitism that dominated the country. Then in 1942, the government realised it was sitting on a gold mine. These young men, who were eager to return to Europe to fight the Nazis, not only spoke the language, they knew the customs, the terrain, even the psychology of the enemy. Who better to question POWs and infiltrate enemy lines?

A top-secret camp, second in security only to the Manhattan Project, was set up to instruct these men. It was called Camp Ritchie, and the men became known as Ritchie Boys.

The training was arduous. The duty was chillingly dangerous. They were told that if they were captured they must never let on that they’d been born in Germany and especially not that they were Jews for fear of being shot as spies rather than treated as POWs. At least two of them suffered that fate and were executed on the spot.
After the war the fewer than two thousand Ritchie Boys were credited with having provided sixty percent of all actionable combat intelligence on the western front. Nonetheless, for almost half a century they were not permitted to talk about their exploits. Only now is their story being told. It is one of heroism, patriotism, and the extraordinary bonds these men forged among themselves and with their adopted country. Powerful and Moving: Read Our Review of Return to Berlin by Ellen Feldman 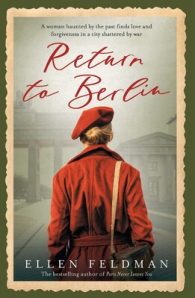