A Funny, Fierce Debut: Have a Sneak Peek at Maggie’s Going Nowhere by Rose Hartley Maggie Cotton’s life is a hot mess. She manages to get dumped by her boyfriend, disinherited by her mum, and kicked out of the three-year degree she’d stretched to a decade – all in the one day! And that was before she received the letter saying she owed the government $70,000. She’s really reached the low of all lows. But that’s still no reason to grow up, is it?

With a final sum of money from her mother, Maggie decides to purchase a decrepit 1960’s caravan to live in.  But now she has to prove that she can survive without using her mum as her backup every time something goes wrong. Trawling her way through the Centrelink system, Maggie manages to lock down a job volunteering, but will she stick it out? It’s certainly easier stayingat the volunteer job when she meets her sexy workmate Rueben – someone Maggie is trying desperately to impress and convince she’s not a walking disaster. Throw into this mix Maggie’s wonderful and loyal best friend Jen. But Jen is set to marry a scumbag Maggie despises. Can Maggie get back in her Mum’s good graces, snag the sexy co-worker and save her best friend? For someone who’s spent her life avoiding hard work, she sure can move mountains when she’s got a little motivation – just don’t ask her to move the caravan.

Rose Hartley writes a funny, fierce and raw debut in Maggie’s Going Nowhere. The characters are hilariously real and the situations completely believable! Most readers will recognise Maggie in someone they know, whether an acquaintance, friend or even themselves. But what will be even more recognisable are the ways people react to Maggie. She makes a decision and you shake your head, knowing the outcome can’t possibly be good! From using her last few dollars to purchase the caravan, to waking up and sticking to the vinyl covered mattress, to deciding what groceries to buy based on what doesn’t need to go in the fridge, Maggie’s story is a riot of laughs.

Hartley deftly creates a way for us to like someone who could be a rather unlikeable character. Maggie hasn’t done anything for herself in years, and yet here we are hoping she’ll succeed! She destroys a priceless piece of family memorabilia, shrugs and walks away, and we forgive her for it! While being a hilarious character, aptly compared to Fleabag, Maggie’s story is also surprisingly heart-warming. There are moments where your faith in humanity is restored, and we learn that everyone can change – if given the right motivation! A delightfully snarky and funny debut that will keep you laughing and at the same time, fill you with hope. 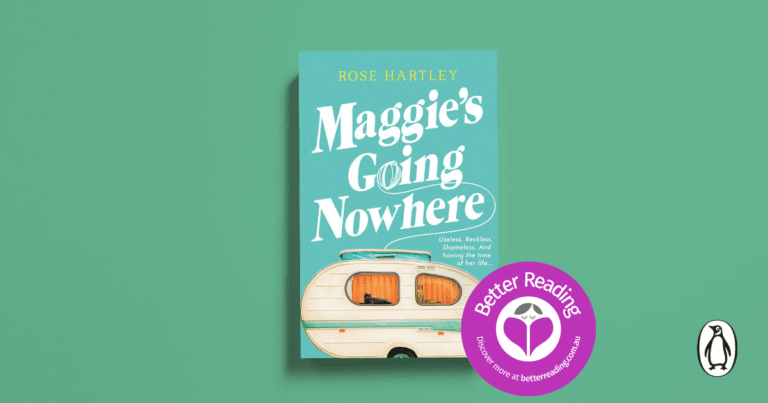 Maggie's Going Nowhere by Rose Hartley is Going Straight to the Top of Your TBR. Read a Review here. 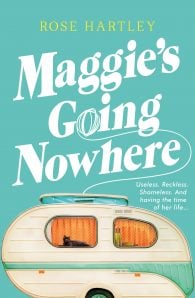 Maggie’s Going Nowhere is a fierce and funny debut introducing a thoroughly relatable and offbeat heroine. If you enjoy Fleabag, you'll adore Maggie!'A compulsive and hilarious read. In Maggie, Hartley has created one of those indelible characters of whom we must thoroughly disapprove and yet cannot help but love.' Karen Joy FowlerMaggie Cotton’s life is a hot mess.In one day, she’s dumped by her boyfriend, disinherited by her mum, and kicked off the three-year degree course she’d stretched to a decade. And that was before she received the letter saying she owed the government $70,000.But that’s no reason to grow up, is it?With a decrepit 1960s caravan to call home, Maggie has to prove to her mother she can survive without a safety net, stop her loyal best friend Jen from marrying a scumbag, and convince her sexy workmate Rueben that she’s not a walking disaster. For someone who’s spent her life avoiding hard work, she sure can move mountains when she’s got a little motivation – just don’t ask her to move the caravan. 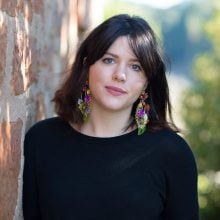 Rose Hartley is a graduate of the Clarion Writers’ Workshop. She lives in Adelaide with her cat, Doris, and her 1962 caravan, Cecil. Maggie's Going Nowhere is her first novel. 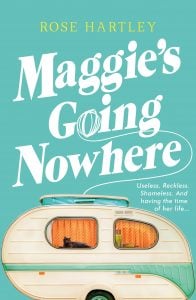