Christine Bell’s, No Small Shame is impossible to put down. See For Yourself… ‘Can you not try again to change your da’s mind, Liam?’
Mary sucked her lips between her teeth, as much to stop her shivering, the night damp soaking cold through her skirt, as worry over the misery beast sitting beside her. She could scarcely make out Liam’s expression in the growing dusk, but his scowl came clear enough when he glared back at her.
‘Da won’t listen. Da never listens. He wants me underground,

same as every other beggar in the Pailis, scraping a few shillings in the dark. Same as him.’ Liam kicked out at a hunk of rock, sending it into the deepening shadows at the bottom of the coal bing. ‘Da just don’t want me to raise meself up, to be better than him. He’s afraid I’ll do things he never even thought to do. Well, I will too, first chance I get. No-one’s keeping me underground.’

Mary shrugged helplessly. Nothing left to say. The argument of months between Liam and his da could go to the highest court in the land, but there was no getting around it or changing Joe Merrilees’ mind. Fourteen tomorrow, Liam would be starting down the pit – as expected. He was only sitting there beside her now because he was unable to tell his pals, them all happy to be out of school and most of them down the pit too.

How would Liam bear it? The boy who laughed out loud at the wind messing in his hair and found animals and faces in clouds, same as her. The same boy who’d call her outdoors in the bitterest winter cold rather than be cooped up inside. How could that boy bear to go down into the dark? How could she bear to watch him go? She searched for words to show herself equal to his misery. Prove herself determined as him. ‘Maw ain’t sending me to work on the dirty pithead or keeping me home waiting on marriage and babies neither.’ ‘Yeah?’

‘Yeah.’ Mary flushed at the note of admiration in Liam’s tone. 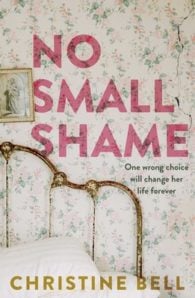 Australia, 1914. The world is erupting in war. Jobs are scarce and immigrants unwelcome. For young Catholic Mary O’Donnell, this is not the new life she imagined.When one foolish night of passion leads to an unexpected pregnancy and a loveless marriage, Mary’s reluctant husband Liam escapes to the trenches. With her overbearing mother attempting to control her every decision, Mary flees to Melbourne determined to build a life for herself and her child. There, she forms an unlikely friendship with Protestant army reject Tom Robbins.But as a shattering betrayal is revealed, Mary must make an impossible choice. Does she embrace the path fate has set for her, or follow the one she longs to take?From the harshness of a pit village in Scotland to the upheaval of wartime Australia, No Small Shame tells the moving story of love and duty, loyalty and betrayal, and confronting the past before you can seek a future. 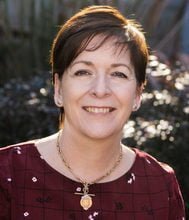 Christine Bell is a Melbourne fiction writer. In 2019 she was awarded the inaugural HNSA Colleen McCullough Residency for an Established Author. In 2014, she was awarded a Varuna Retreat Fellowship for her YA novel manuscript, Prison Boy. Her other adult and children’s short stories have won or been commended in national writing competitions and published in various anthologies. Prior to completing her Master of Creative Writing degree, Christine had 35 short fiction titles published for children. When she is not writing, Chris is learning to play the piano or day dreaming of her next research trip to France. No Small Shame is her first published adult historical novel.