There once was a boy named Rowan, and Rowan was a happy child. He had two parents who loved him very much and he had lots of toys to play with.

Sometimes Rowan would bring his toys to school and play with them at recess, but he stopped doing that after he got bullied by some jerks.

That made Rowan sad because he thought playing with toys was the best thing about being a kid. But Rowan’s classmates didn’t feel the same way and they were always trying to act older than they really were.

One day when Rowan was in class he felt a strange tickling sensation under his armpit. He didn’t know what it was so he asked his teacher Mrs. Pennington if he could please be excused to the restroom.

When Rowan got to the bathroom he took off his shirt and was shocked to see a single hair growing from the center of his armpit.

Rowan didn’t know what to do so he put his shirt back on and returned to class. And when he sat down he felt like everyone in the classroom could tell something was different about him, even Mrs. Pennington. How Well Do You Know the Wimpy Kid World? Take This Quiz to Find Out! 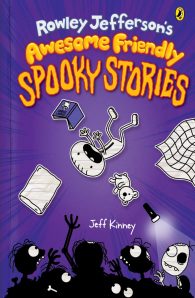 Scare yourself silly with Rowley Jefferson's Awesome Friendly Spooky Stories by Jeff Kinney, the #1 international bestselling author of Diary of a Wimpy Kid! Grab a flashlight, crawl under the covers, and dive into the twisted, unexpectedly hilarious world of Rowley Jefferson's imagination. You'll meet zombies, vampires, ghosts, and much more in these comically terrifying tales. Rowley's spooky stories might leave you laughing, but beware—you could end up sleeping with the lights on!