Compulsive, Fascinating, Highly Recommended: Read an Extract From Against All Odds by Dr Richard Harris and Dr Craig Challen In June 2018, for seventeen days, the world watched and held its breath as the Wild Boars soccer team were trapped deep in a cave in Thailand. Marooned beyond flooded cave passages after unexpected rains, they were finally rescued, one-by-one, against almost impossible odds, by an international cave-diving team which included Australians Dr Richard Harris and Dr Craig Challen. We were all glued to our various screens watching this rescue take place and then most of us read or watched at least some of the press afterwards. We feel like we know this story already, so it’s no easy feat writing a book about the rescue that offers not only a fresh perspective but also keeps us on the edge of our seat. Against All Odds achieves this. I was absolutely riveted, glued to this heart-pounding book as if the outcome could possibly change. 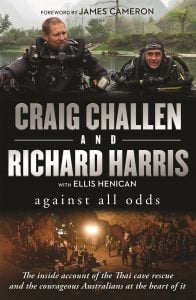 This is the inside account of the breathtaking rescue that captured the world. It is the story of two Australian men who became international heroes. Harris and Challen were chosen for their medical expertise and cave diving knowledge. Harris is an anaesthetist, Challen a veterinary surgeon. They are also two of a very small population of experienced cave divers in the world.

“But why would anyone want to dive in a cave?

We’ve been getting that question for years. I used to say: ‘If you need to ask the question, you wouldn’t understand the answer.’”

One of the truly fascinating aspects of this book are the descriptions around deep cave dives. I quickly surmised that you couldn’t pay me to explore the places they’re compelled to explore, but I was glued to the page. The description of them recovering the body of a fellow diver is harrowing and sets up the seriousness of the situation with the young boys.

The rescue itself is utterly gripping. Challen and Harris had to remain calm under extreme pressure and intense scrutiny, adapt to constantly changing circumstances and importantly, build trust among the rescue team and with the young boys and their coach, whose lives were in their hands. Daring decisions about how to get the boys out were made, and the weight of that at the time is obvious reading this.

This is a story of determination, cunning and triumph that will long be remembered. It’s the real story, not the one fed to us by the media at the time. It’s personal – the passion for this adrenaline sport, how their family dealt with their involvement in this rescue, and the death of Richard Harris’s father when he was celebrating the final rescue.

As a child I was obsessed with reading stories of great survival – This is the closest I’ve come in recent years to that feeling of pure fascination and thrill. I loved this book. It’s well written and perfectly paced, covers a fascinating subject and hooks you in from the word go. I was flipping pages until the very end, praying those boys would be rescued again. I hope I’m not ruining the ending by telling you they were.

Buy a copy of Against All Odds here.

Richard ‘Harry’ Harris SC OAM is an Australian anaesthetist and cave diver who played a crucial role in the Tham Luang cave rescue. He and Craig Challen were jointly awarded 2019 Australian of the Year 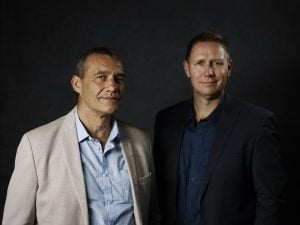 as a result of that rescue.

Craig Challen SC OAM is an Australian veterinary surgeon, technical diver and cave explorer. He was the recipient of the Oztek 2009 Diver of the Year award for his services to caving, and was jointly awarded 2019 Australian of the Year. Absolutely Riveting: Read a Review of Against All Odds by Dr Richard Harris and Dr Craig Challen Podcast: Dr Richard Harris and Dr Craig Challen on their Involvement in the Thai Cave Rescue 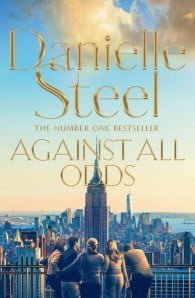 Kate Madison's stylish second-hand clothing shop has been a big success in New York, supporting her and her four kids since her husband's untimely death. Now her children have grown up, they are ready to forge lives of their own. They all choose to play against the odds, much to their mother's dismay.Isabelle, a dedicated attorney, is in line to make partner at her Wall Street firm, when she falls for a client she represents in a criminal case. She tells herself she can make a life with him - but can she? Julie, a young designer, meets a man who seems too good to be true and falls under his spell. She marries him quickly, gives up her job, moves to LA to be at his side - is all what it seems? Justin is a struggling writer who pushes for children with his partner before they're financially or emotionally ready. Will the strain on the relationship take too high a toll? Willie, the youngest, a tech expert, makes a choice that shocks them all, with a woman fifteen years older.Kate - loving, supportive and outspoken - can't keep her children from playing against the odds.Can the odds be beaten?About the AuthorDanielle Steel has been hailed as one of the world's most popular authors, with nearly a billion copies of her novels sold. Her many international bestsellers includeProperty of a Noblewoman, Blue, Precious Gifts, Undercover, The Apartment, Prodigal Son, Pegasus, A Perfect Life and other highly acclaimed novels. She is also the author of His Bright Light, the story of her son Nick Traina's life and death; A Gift of Hope, a memoir of her work with the homeless; and the children's books Pretty Minnie in Paris and Pretty Minnie in Hollywood.

Craig Challen SC OAM is an Australian veterinary surgeon, technical diver and cave explorer. He was the recipient of the Oztek 2009 Diver of the Year award for his services to caving, and was jointly awarded 2019 Australian of the Year. 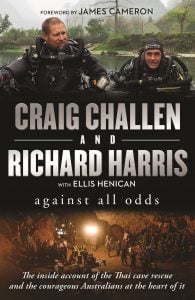 Richard ‘Harry’ Harris SC OAM is an Australian anaesthetist and cave diver who played a crucial role in the Tham Luang cave rescue. He and Craig Challen were jointly awarded 2019 Australian of the Year as a result of that rescue.