Must Read Crime Fiction: Read an Extract of The Unbelieved by Vikki Petraitis Sally’s husband, Herb, was ready at dawn for the round-up. He headed outside while she got started in the kitchen. The whiny sound of his dirt bike followed by the thunder of small hooves always brought her to the verandah. The breeze was blowing inland and she could smell the sea. Their farm bordered a national park that boasted a convergence of cliffs known as the Devil’s Corner.

Jagged rocks and a current that swirled and writhed beneath a deceptively calm surface. Over the years, the area had snared many a fishing boat, dragging strong men to early graves, but for Sally and Herb the rugged beauty of the sweeping Deception Bay coastline was often ignored for more pressing duties, like sheep. The paddocks were golden at this time of the morning in early spring. Like scurrying children in fleecy pyjamas, the sheep moved in waves, reined in by Herb on the bike and the dogs circling the herd in a frenzy of barking. Sally straightened her apron and went back inside. She had the shearers’ breakfast to finish.

Half an hour later, Sally was covering a baking dish of scrambled eggs when the bang of the wire door announced Herb.

‘Bloody Millard hasn’t turned up again. Will you get on the phone and see where he is?’ Sally sighed. She had little time for Brett Millard. Unreliableshearers were the worst. When he turned up, Brett could match the other blokes sheep for sheep, but it fell to Sally to chase him when he was a no-show. Sometimes it was Brett’s wife, Shayna, who answered the phone. She’d apologise, exasperated, and say, Sorry, Sal! I’ll make sure he’s there tomorrow.

Good shearer or not, Brett Millard was easily distracted; Shayna was the opposite. Worked up at the hospital. Backbone of the young family. Problem was, thought Sally as she dialled the number, men like Brett rarely improved with age—Shayna had a tough road ahead of her…

Buy a copy of The Unbelieved here. Triumphant Debut Crime: Read Our Review of The Unbelieved by Vikki Petraitis Your Preview Verdict: The Unbelieved by Vikki Petraitis 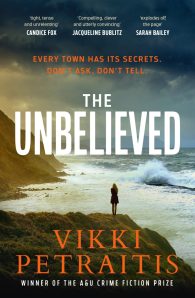 When Senior Detective Antigone Pollard moves to the coastal town of Deception Bay, she is still in shock and grief. Back in Melbourne, one of her cases had gone catastrophically wrong, and to escape the guilt and the haunting memories, she'd requested a transfer to the quiet town she'd grown up in.But there are some things you can't run from. A month into her new life, she is targeted by a would-be rapist at the pub, and realises why there have been no convictions following a spate of similar sexual attacks in the surrounding district. The male witnesses in the pub back her attacker and even her boss doesn't believe her.Hers is the first reported case in Deception Bay, but soon there are more. As Antigone searches for answers, she encounters a wall of silence in the town built of secrets and denial and fear. The women of Deception Bay are scared and the law is not on their side. The nightmare has followed her home.Chilling, timely and gripping, The Unbelieved takes us behind the headlines to a small-town world that is all too real - and introduces us to a brilliant new voice in crime fiction.

Vikki Petraitis is best known for her true crime books including the bestselling book The Frankston Murders about serial killer Paul Denyer, and her first book, The Phillip Island Murder, which has been featured in several TV shows and podcasts. In her true crime books, Vikki has covered everything from police dogs to Lawyer X, the Russell Street bombing and sex crimes. Her expertise lies in interviewing police and victims to create compelling narratives. In recent years, Vikki has made two hugely successful podcast series with Casefile Presents, which have topped charts around the world and been downloaded millions of times. She is now working with the Casefile team developing new true crime projects. Vikki began a PhD in Creative Writing at La Trobe University in 2017 in order to continue to expand her writing skills. She brought thirty years of true crime writing and investigating to create her first work of fiction, The Unbelieved. In a parallel career, Vikki is also a teacher with a Master's degree in IT Education. She runs creative writing workshops and short courses in schools and local libraries. She is also a popular presenter, well-known for her compelling true crime talks and keynote addresses. 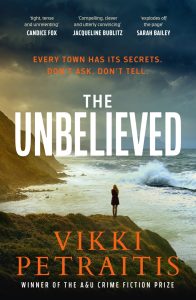