The sky was pink. Which was better than red, El said, when we started to get scared again. Grandpa had always told us, Red sky at night, sailor’s delight; red sky in the morning, sailor’s warning. And he used to be one. The wind was cold, getting colder. El’s face was still streaked with tears, and her fingers twitched. I couldn’t stop shaking.

We held hands and followed our noses, until every street of high, crowded tenements and terraces blurred into one looming dark house where the murderers of children lived and lurked and watched. But we saw no one. Heard no one. As if we were in Mirrorland again. Safe and scared. All that changed was the smell of the firth, getting stronger, nearer.

The harbour was grease and oil and metal and salt. Seagulls were waking up, crowing like cockerels. We stopped next to a wooden warehouse, stripped and wet- dark. In front of it, a crane that dangled a hook on the end of rusty chains and a stony slope that soon disappeared underwater… Twisty, Dark and Brilliantly Crafted: Read our Review of Mirrorland by Carole Johnstone 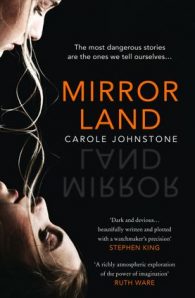 No. 36 Westeryk Road: an imposing flat-stone house on the outskirts of Edinburgh. A place of curving shadows and crumbling grandeur. But it’s what lies under the house that is extraordinary – Mirrorland. A vivid make-believe world that twin sisters Cat and El created as children. A place of escape, but from what? Now in her thirties, Cat has turned her back on her past. But when she receives news that one sunny morning, El left harbour in her sailboat and never came back, she is forced to return to Westeryk Road; to re-enter a forgotten world of lies, betrayal and danger. Because El had a plan. She’s left behind a treasure hunt that will unearth long-buried secrets. And to discover the truth, Cat must first confront the reality of her childhood – a childhood that wasn’t nearly as idyllic as she remembers…

Carole Johnstone's award-winning short fiction has been reprinted in many annual 'Best of' anthologies in the UK and US. She lives in Argyll & Bute, Scotland, with her husband. Mirrorland is her debut novel. 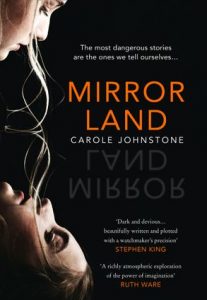