Science and Singapore: Check Out a Sampler from Kensy and Max 7: Take Down by Jacqueline Harvey Max turned the handle of the door that had just shut behind him, only to find it refused to budge. ‘Hey!’ he yelled, pounding his fist on the metal surface, but there was no answer.

Curtis looked around the empty stairwell and jiggled uncomfortably on the spot. ‘There’s no toilet out here, is there?’

‘I’m really sorry. I can’t believe I fell for it,’ Curtis said. ‘That kid was so convincing – I just thought he was being kind.’

‘That was probably the furthest thing from his mind.’ Max gave a wry grin and closed his eyes, remembering the plan of the stadium he’d been studying this past week.

‘We’ve got to find a way back inside of the team’s going to be disqualified and it will be all my fault,’ Curtis lamented. He banged on the door and yelled for help again but no one came.

They’d spent the day at the O2 Arena with dozens of other school groups, competing in the National STEM finals, which comprised a series of challenges designed to test the children’s knowledge of science, technology, engineering and mathematics. When the afternoon tea break had seen a mass exodus of students to the toilets, the pair had trusted a boy from another team at his word when he said there was an additional facility at the end of the hallway. They were through the door before they realised it was a trick.

‘Come on,’ Max said, and raced up to the next level. ‘I think I know a way out of here. Round Seven - In Singapore! Read our Review of Kensy and Max 7: Take Down by Jacqueline Harvey Page-turning spy series: Read an extract from Kensy and Max 7: Take Down by Jacqueline Harvey 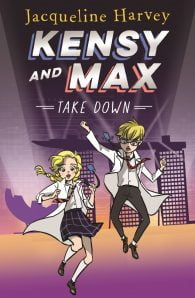 How do you pretend everything is fine when those you love are in danger? If people you once trusted are now deemed a threat? After winning the National STEM Championships, Kensy, Max and a team of students from Central London Free School are ready to compete for the international trophy in Singapore. But when Granny Cordelia is poisoned, the twins no longer feel like celebrating. They still have a duty to their team though, and everyone seems to think they’ll be safe in a country halfway around the world. It turns out that Singapore is rife with mysteries. Soon Kensy and Max have uncovered a much larger case than anyone counted on. And this time, it’s personal.