Serious sleuthing: Read an extract from The Violet Veil Mysteries: A Case of Grave Danger by Sophie Cleverly I was born in the mortuary. Topsy-turvy, I know, but that’s the truth of it. My mother said the slab was cold and hard, but that she was in no fit state to quarrel at the time. They named me Violet, for the flower – the twin to my mother’s name, Iris. I think they were hoping I would be a Shrinking Violet, modest and shy, but it was soon apparent that I was not.

My middle name is Victoria, after the queen. They said she was in mourning for her husband these days, roaming the palace dressed only in black. I didn’t see anything unusual about that. Father had clothed us in dark and sombre colours for as long as I could remember. ‘We’re always in mourning for someone,’ he’d say.

Being on the edge of life and death was a funny thing. Sometimes, out among the graves, I could sense the dead. It was just a feeling – an echo of emotion, a scattering of words. It was just a part of me, and I had grown used to it – grown used to keeping quiet about it too, because all I got were strange looks and shushes from grown-ups if I were to mention it.

Often the dead didn’t have much to say. But I was soon to encounter a dead person who had a lot more to say than usual.

The day of the miracle, I had recently turned thirteen years old, and I was out collecting apples in the cemetery. I took a bite of one and it was as crisp as the autumn air. My black greyhound, Bones, ran circles around my feet, sniffing the ground with his long nose.

Bones was a fairly recent addition to the family. I had found him wandering amongst the headstones. As soon as he’d spotted me, he wouldn’t leave me alone. He wore no collar and looked skinny – but then all greyhounds do.

I named him Bones, because growing up as the daughter of an undertaker and living, as we did, beside a graveyard, it just seemed fitting. I fed him scraps and begged Mother to let me keep him. She said no. So I asked Father, who said maybe. Mother finally gave in and said I could have him, but all the same, she made Bones sleep outside. Breakout new detective series: Read our review of The Violet Veil Mysteries: A Case of Grave Danger by Sophie Cleverly 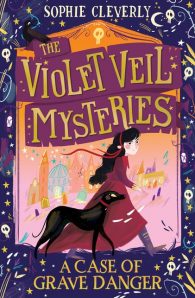 A breakout new detective series, from the author of the spine-tingling SCARLET AND IVY series, beautifully illustrated by Hannah Peck. Violet Veil wants nothing more than to prove her worth and become her father’s apprentice at Veil & Sons Undertakers. And one rain-soaked night she gets her chance when she meets a boy, Oliver, who is wandering around the graveyard. Only, the last time Violet saw Oliver, he was indoors and very much dead, waiting to be buried. Violet has just found her first case, and it doesn’t get bigger than this: can she, with the help of her dog, Bones, help Oliver solve his own ‘murder’? 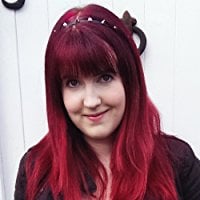 Sophie Cleverly-Edwards was born in Bath in 1989. She wrote her first story at the age of four, though it used no punctuation and was essentially one long sentence. Thankfully, things have improved somewhat since then, and she has earned a BA in Creative Writing and MA in Writing for Young People from Bath Spa University. Now working as a full-time writer, Sophie lives with her partner in Wiltshire, where she has a house full of books and a garden full of crows.The books largely consist of fantasy and historical novels; many of them for children and young adults. You probably don't want to know what the crows consist of. 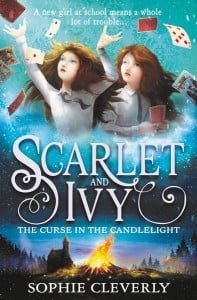 Scarlet And Ivy #5: The Curse in the Candlelight 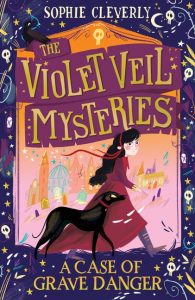 A Case of Grave Danger (The Violet Veil Mysteries)