Timely and Powerful: Read an Extract from Heroes of the Secret Underground by Susanne Gervay Banging shakes the foundations of the house.

The professor rises and nods a Mamma to stay in her seat. He signals everyone to be very quiet while he walks towards the front door. The girl, their daughter Verushka, watches as still as alabaster. Her friend, the boy Zoltan, presses his hands to the back of Verushka’s chair.

Heavy black boots stamp down the hallway. The ceiling pendants vibrate, flinging broken bronze beams through the sitting room. Four men march inside, wearing uniforms with spider arrows on their arms, guns in their belts.

The Lieutenant holds out his notebook. ‘We are making a record of everything here in this house.’ He grins. ‘To take away for safe keeping.’

The soldiers study the walls filled with paintings of mythical Greek gods, fields of honey and gold, generations of portraits. One soldier picks up the golden candelabra with its seven lamps of wisdom.

The professor grabs her hands. ‘Leave it.’ You must leave it.’

Verushka whispers, ‘Shush, Mamma. They may take the candelabra, but they can’t take the light. That is always ours.’

Mamma leans back in her armchair. Her eyes cloud over as the soldier steals the candelabra. The silence is lead as the Lieutenant continues to write his inventory. He writes the list of all the precious things that make up their home. He threatens, ‘Do not think of hiding anythimg. Otherwise …’ He points to a soldier. ‘We will be back with a truck. He’ll wait at the front door.’ A Heart-Racing Time-Slip: Read our Review of Heroes of the Secret Underground by Susanne Gervay 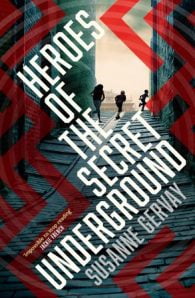 A timely and powerful time-slip story inspired by the author's family in Budapest during the Holocaust Louie lives with her brothers, Bert and Teddy, in a hotel run by their grandparents. It is one of Sydney's grand old buildings, rich in history ... and in secrets. When a rose-gold locket, once thought lost, is uncovered, it sends Louie and her brothers spinning back in time. Back to a world at war: Budapest in the winter of 1944, where their grandparents are hiding secrets of their own... From bestselling author Susanne Gervay comes a heart-racing timeslip story inspired by her own family's escape from Budapest during the Holocaust. 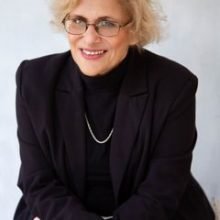 As a child of refugees, books were a safe and special place for Susanne Gervay to explore the world and ideas. She wants that for all young people. You'll find her planting mangroves in Kiribati; in Istanbul speaking to thousands of kids about no bullying; in remote indigenous schools bringing literacy to kids; touring with her I Am Jack play, adapted by Monkey Baa Theatre across Australia and the USA. Susanne's acclaimed books are widely endorsed by the Cancer Council NSW, Variety and The Children's Hospital Westmead. She is an ambassador for Room to Read, bringing education to the children of the developing world; a role model for Books in Homes, taking books to disadvantaged and indigenous children in Australia; and a literacy ambassador for many campaigns. Susanne is also Regional Advisor for the Society of Children's Book Writers and Illustrators (SCBWI), promoting the community of writers and illustrators in Australia and internationally. She has been awarded the Lifetime Social Justice Literature Award by the International Literacy Association, an Order of Australia, and was nominated for the Astrid Lindgren Memorial Award. 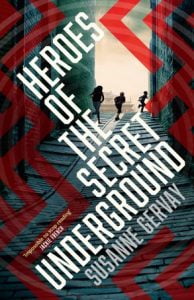 Heroes of the Secret Underground