‘Thanks,’ Grace said when the barman slid the glass of red across the bar. A drink while she waited for her brother … What an inspired idea.

Six drinks later and with still no sign of Tim, the idea didn’t feel so inspired.

As Grace stared at herself in the bathroom mirror, she swiped at the tears, not sure whether to laugh or cry. Firmly into her fourth decade, she’d driven the big white bus for the first time in her life. And ruined her favourite silk blouse in the process.

She washed her hands, splashing cold water onto her face. After dabbing at the splotches on her blouse with a paper towel, Grace looked at herself in the mirror again and groaned. No matter how expensive the mascara, it always ran when you added water.

Closing her eyes, Grace braced herself on the edge of the handbasin, swallowing against a sour wave of nausea. Her eyes snapped open when a pack-a-day voice enquired, ‘You all right there, darl?’

Hovering behind her was a slim, weathered woman of indeterminate age. Brittle, copper-coloured hair was swept into a bird’s nest above her angular features.

Their eyes met in the mirror. It was hard to say whose were more bloodshot. When Grace Went Away Author, Meredith Appleyard, on Writing for the Joy of it A Poignant Family Story: Review of When Grace Went Away by Meredith Appleyard 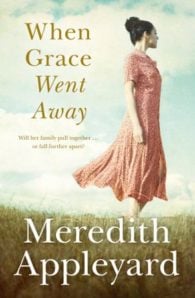 Classic, women-centred fiction, a complex, multi-layered story about family and community, from the author of the warmly received Home at Last.'Functionally dysfunctional.' That's how financial analyst Grace Fairley describes her family in the small South Australian farming community of Miners Ridge - a family fractured by tragedy and kept that way by anger, resentment and petty jealousies. As the eldest sibling, Grace tries to keep the family in touch, but now she's accepted a promotion to the London office. Time-zones and an enormous workload mean she's forced to take a step back, although she finds time to stay in contact with Miners Ridge landscape gardener Aaron Halliday.Sarah Fairley, Grace's mother, fled Miners Ridge and her embittered husband eight years ago. Now, in the absence of Grace, she finds herself pulled back to the small town where her estranged children and grandchildren live. Drawn into the local community, and trying to rebuild family relationships, she uncovers a long-kept secret that could change her world ...Can Grace, Sarah and their family find a way to heal? Who will have the courage to make the first move? 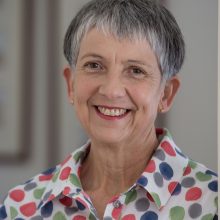 Meredith Appleyard lives in the Clare Valley wine-growing region of South Australia. As a registered nurse and midwife she practised in a wide range of country health settings, including the Royal Flying Doctor Service. She has been an agency nurse in London and a volunteer in Vietnam. When a friend challenged Meredith to do what she'd always wanted to do – write a novel – she saved up, took time off work, sat down at the computer and wrote her first novel. Realising after the first rejection letter she needed to learn more about the craft of writing, she attended workshops, joined a writers' group and successfully completed an Advanced Diploma of Arts in Professional Writing with the Adelaide Centre for Arts. Meredith lives with her husband and border collie Lily, and when she's not writing she's reading! 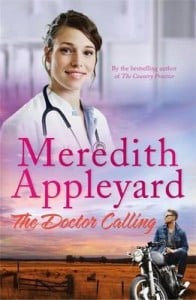 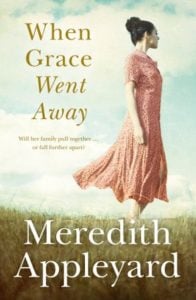 When Grace Went Away