Unicorns Belong in Nightmares: Read an Extract from Skandar and the Unicorn Thief by A.F. Steadman Skandar and Bobby moved closer to the Hatchery door inch by inch. To Skandar’s relief they didn’t speak. He couldn’t believe that the first person he’d had a proper conversation with on the Island already knew he was lying.

Okay, so she thought he was just lying about the fact that he’d come in her helicopter, but it was only a matter of time, wasn’t it? Until she raised the alarm?

Skandar forced himself to take a deep breath, like he did at school when Owen and his friends were being particularly terrible. Who cared if one person knew? Why would she bother herself with him? And maybe she wouldn’t even be able to open the Hatchery door – or maybe he wouldn’t and this would all be for nothing.

Skandar was still too far back to see what was happening outside the Hatchery, but every so often he heard a cheer, which meant someone had opened the door. Whenever there was a long silence, Skandar felt his stomach lurch at the thought of being turned away.

‘Stop stressing,’ Bobby hissed in his ear, when he forgot to step forward. ‘They’re mostly Islanders at the front. They basically all try out, remember? More of them get rejected, because more try
out. Didn’t they teach you anything at your school?’

Skandar didn’t say anything, not wanting to prompt questions about the Hatchery exam he definitely hadn’t taken. As the line moved forward, Mainlanders who’d failed to open the door started being sent back towards the helicopters. Some were crying, some looked angry, and others kept their heads bent in disappointment as they trudged the length of the line.

Skandar tried to make himself look away, focusing instead on the top of the Hatchery. Now he was nearer he could see that there were unicorns with riders on top of the mound. And they had silver masks – just like the riders who’d attacked Agatha!

‘What are they doing up there?’ Skandar blurted. Bobby tutted. ‘You’re not the sharpest lemon in the tree, are you?’

‘That’s not even a saying, and I wasn’t talking to you,’ Skandar snapped. His nerves were getting worse; he could almost count the number of people ahead of him. Would those masked riders
arrest him if they found out he’d never passed the exam? Was that what they were there for?

Buy a copy of Skandar and the Unicorn Thief here Your Preview Verdict: Skandar and the Unicorn Thief by A.F. Steadman An Exhilarating New Adventure: Read Our Review of Skandar and the Unicorn Thief by A.F. Steadman 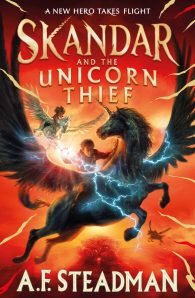 For ages 9+The first book in the hotly anticipated new fantasy adventure series for readers age 9+, from A. F. Steadman. If you like Harry Potter, Percy Jackson, Eragon or His Dark Materials, you’ll love this . . .Unicorns don’t belong in fairy tales; they belong in nightmares.So begins Skandar and the Unicorn Thief. Soar into a world where unicorns are real – and they’re deadly. They can only be tamed by the rider who hatches them.Thirteen-year-old Skandar Smith has only ever wanted to be a unicorn rider, and the time has finally come for him to take his Hatchery Exam, which will determine whether he is destined to hatch a unicorn egg. But when Skandar is stopped from taking the exam, and the mysterious and frightening Weaver steals the most powerful unicorn in the world, becoming a rider proves a lot more dangerous than he could ever have imagined. And what if Skandar was always destined to be the villain rather than the hero?Get ready for unlikely heroes, elemental magic, fierce sky battles, ancient secrets, nail-biting races and, of course, bloodthirsty unicorns. This will be the biggest new series of 2022.

A.F. Steadman grew up in the Kent countryside, getting lost in fantasy worlds and scribbling stories in notebooks. Before focusing on writing, she worked in law, until she realized that there wasn’t nearly enough magic involved. Skandar and the Unicorn Thief is her debut novel. 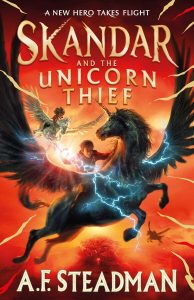 Skandar and the Unicorn Thief