You’re Kept on the Edge of Your Seat: Read an Extract From Darkness for Light by Emma Viskic Caleb Zelic is a private investigator. He’s a hard worker, he’s committed. And he’s deaf. After a lifetime of bad decisions Caleb is finally making good ones. He calls it his Making Good Decisions plan – with the capital letters. He’s seeing a therapist, he’s building up his connections in the Deaf community, and he’s reconnecting and reconciling with his wife. Everything is looking on the up for Caleb and his Good Decisions.

But Caleb can’t escape his past. A series of murders throw Caleb back into touch with Frankie – his double-crossing ex work partner. Frankie’s previous betrayal makes her incredibly hard to trust. But when Frankie’s sister is almost murdered, and her niece kidnapped, Caleb has to put aside his misgivings and work with Frankie to try and save her niece before any harm comes to her. This mission won’t just test their friendship, it will put everything they have at risk, including their own lives.

I was in awe while reading this book. While it is the third book in the Caleb Zelic series, it reads very easily as a standalone, and is just an incredible story. Emma Viskic is one of the best crime writers I have read, seamlessly blending story, action and heart into one novel. She weaves idle conversations into the beginning of the story that you don’t realise the importance of until much later. The connections between the characters are brilliantly created. You feel Caleb’s joy when he’s with Kat, and his pain when things go wrong. You’re kept on the edge of your seat wondering how the twists and turns will play out.

Not having read the previous books in the series, I was very interested to see how a deaf PI worked on page. We had Emma in our office recently and she addressed this question as well, having spent a lot of time considering this before she began writing. Would he use Auslan, would he lipread? In fact, he does both brilliantly. While you’re aware that Caleb is deaf while reading, he refuses to let his deafness limit his opportunities to participate. Having briefly learned Auslan myself, I was very excited to see it represented in mainstream media.

Emma is a brilliant author, and Caleb is a fantastic protagonist; and one I would love to read again. You’ll find me curled up with the two previous books this summer. Gripping, action-packed and real.

Buy a copy of Darkness for Light here 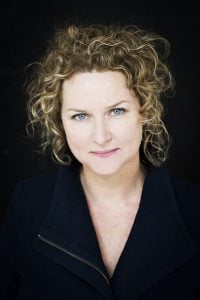 Gripping, Action-Packed and Real: Review of Darkness for Light by Emma Viskic 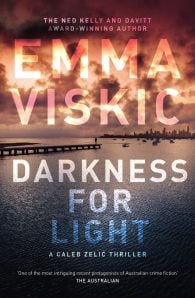 The third thrilling instalment in the award-winning Caleb Zelic series.

After a lifetime of bad decisions troubled PI Caleb Zelic is finally making good ones. He's in therapy, reconnecting with the Deaf community, and reconciling with his beloved wife.But he can't escape his past.A violent confrontation forces Caleb back into contact with his double-crossing partner, Frankie. When her niece is kidnapped, Frankie and Caleb must work together to save the child's life. But their efforts will risk everything, including their own lives. 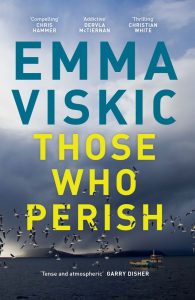