‘If you want Fran to die, add two. That’s zero-two if you would like to say goodbye to Francesca.’

Michelle? Fran paused to confirm she had been asleep for two episodes. Yep, it was 3.30 pm. She switched off the alarm, then on and off again, but the noise continued.

There was an emergency siren coming from outside. She checked online – no updates for Ash Mountain yet, no need to panic.

‘Dad, the town siren’s going off,’ she yelled from the hall.  ‘Not sure why, nothing online. I’m going to get Vonny, back soon.’

Fran grabbed her backpack and shut the door behind her.

She knew she couldn’t Leave Early, but expected she’d  at least Believe Early; and not be one of those ignoramuses  who are like, Hey take my pic, Check out Nature, Is that…? Can you please tell me what I’m seeing? Believing was proving difficult, however.

To her right, coming in from the north-west, a gigantic wall of black and grey and red, a tsunami of smoke hundreds of metres high, had cut the world in half.

She lost a few seconds to disbelief – was it just clouds? Aliens? The sherry she’d had at 10.20 am? She raced back inside to her bedroom and threw on jeans, a jumper, leather boots, gloves and a beanie. She put a blanket in her backpack,  ran down the hall and hugged her dad: ‘There’s a fire to the  north, you follow the drill.’ Shutting the front door behind  her once more, she checked that all the windows and doors  were closed, that the sprinklers were on and the roof damp. A Small-Town Disaster Thriller: Read our Review of Ash Mountain by Helen FitzGerald 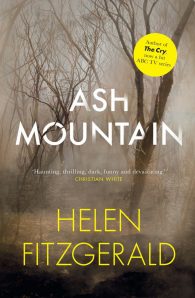 Fran thought she’d never return to Ash Mountain but her dad has become ill, her relationship is over, and she hates her dead-end job in the city anyway. In a blistering summer, childhood memories prick at her fragile self-esteem as old friendships and rivalries are renewed and new ones forged. But the tumult of her home life is the least of her worries because a bushfire is roaring towards Ash Mountain and the town’s long-held secrets will soon be exposed in the carnage. Ash Mountain is a uniquely Australian domestic noir – warm, blackly funny and a powder keg of accumulated tension. Vividly portraying small-town life, and a woman and a land in crisis, this is a disaster thriller you will never forget. 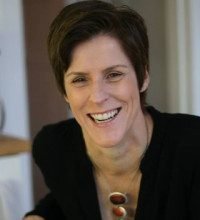 Helen FitzGerald is the bestselling author of ten adult and young adult thrillers, including The Donor (2011) and The Cry (2013), which was longlisted for the Theakstons Old Peculier Crime Novel of the Year, and is now a major drama for BBC1. Helen worked as a criminal justice social worker for over fifteen years. She grew up in Kilmore, Victoria, Australia. She now lives in Glasgow with her husband. 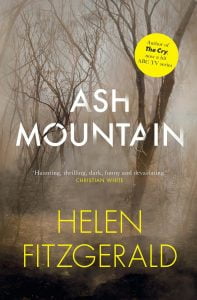