The October sun is as hot as the blood of the angry mob.

John Paul follows the crowd as they chant and push the three young men. They’ve been stripped naked, their scrotums shrunken from fear as the beatings result in wounds that will never become scars.

Sticks. Stones. Bricks. Iron. Bones break, blood flows. Tearing flesh draws short-lived screams from tired lungs. The men fall but are swiftly pulled up and dragged through the streets, towards a place no one picked out, but everyone seems to know.

It rained the day before, making the red earth muddy in several places. When the young men fall here, they’re kicked further into the ground; their blood mixing with sludge. By the time tyres are thrown over their heads like oversized necklaces, and the smell of petrol wafts so strong that some in the crowd cover their noses, madness has staked its claim on what is left of the day.

The strike of a match births flame as a brick crushes the skull of one of the men, leaking brain matter and life, so he doesn’t howl and writhe like the other two, when the fire starts to lick their skin and hair.

The phone thrums in John Paul’s hand. The battery indicator flashes red. He lowers the smartphone and looks around. He’s not the only one bearing digital witness to the execution in progress. He considers using the cell phone he had taken off one of the burning men before the mob pounced, but the irony wouldn’t be worth it. It’s over anyway. Time to go.

As John Paul walks away, I follow him in the shadows, unable to unsee the nightmare he created behind us.
And because he doesn’t look back, neither can I… Powerful and Relevant: Read our Review of Lightseekers by Debut Author Femi Kayode 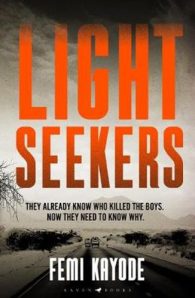 When three young students are brutally murdered in a Nigerian university town, their killings - and their killers - are caught on social media. The world knows who murdered them; what no one knows is why. As the legal trial begins, investigative psychologist Philip Taiwo is contacted by the father of one of the boys, desperate for some answers to his son's murder. But Philip is an expert in crowd behaviour and violence, not a detective, and after travelling to the sleepy university town that bore witness to the killings, he soon feels dramatically out of his depth. 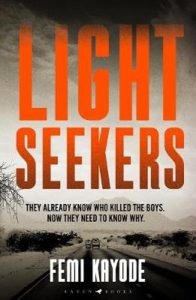