Intimate and Sweeping: Read an Extract from The Secret World of Connie Starr by Robbi Neal Her mother, Flora, would tell everyone that when Connie was born she brought the war with her. This wasn’t actually true as Connie was born on the first Monday in April, 1934, at twelve noon exactly – a good five years and five months before Australia was to plunge itself into the Second World War. But Flora knew as soon as Connie entered the world and opened her lungs to scream that there was more chaos in the world than before and that the chaos Connie had brought would work its damage until the day Connie left the world, which she would not do until her ninety-second year – though Connie would spend the last thirty-two of those years declaring to her children and grandchildren and great-grandchildren that this would be her last Christmas.

When Connie came into the world there was no time for Flora to get to the hospital. Her husband Joseph knew that was certain because he’d seen three babies birthed by his previous wife, so when Flora’s waters spilled in a pond on the kitchen floor, he took Flora to their bedroom, where he ripped back the apricot bedspread with chenille tufted rows and tossed it to the floor where it landed in a crumpled knoll, soon followed by the woollen blankets, and Connie was born on their bed, on the lemon flannelette sheets. Within an hour of the waters breaking she had slipped easily into the world, there were no contracted pains, no writhing and crying out. Joseph had been ready with a damp flannel to wipe the sweat from Flora’s brow but there’d been no sweat, and already it was as if Connie had always been there. As if all it took for her to be birthed was for them to notice her.

As they gazed at their newborn, Connie gazed back, not with the milky eyes of a baby but with eyes sky blue that could see things no one else saw. Flora saw her accusing eyes and felt a shiver run through her. But Joseph saw himself in the sky-blue ponds…

Buy a copy of The Secret World of Connie Starr here. Your Preview Verdict: The Secret World of Connie Starr by Robbi Neal Stunning Australian Historical: Read Our Review of The Secret World of Connie Starr by Robbi Neal 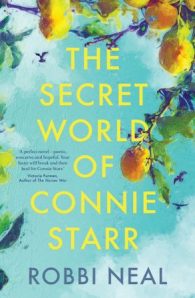 A stunning evocation of Australian life through the war to the 1950s, this novel is intimate and sweeping, immediate and dreamlike - a magical rendering of darkness and joy, and the beauty inherent in difference. For readers of Sarah Winman's Still Life, Trent Dalton's All Our Shimmering Skies and Rosalie Ham's The Dressmaker.Connie Starr was always a difficult child. Her mother knew as soon as Connie entered the world that day in Ballarat in 1934 and opened her lungs to scream, there was more chaos in the world than before and it wouldn't leave until Connie did. From the safety of a branch high in her lemon tree where she speaks to angels, she sees the world for what it is - a swirling mass of beauty and darkness, of trauma and family, of love and war and truth and lies - lies that might just undo her and drive her to a desperate act.This ambitious, complex and insightful novel intertwines numerous stories of lives from before World War II and beyond, recreating with intimacy and breadth a world that is now lost to us. This book is a brightly coloured patchwork quilt of everything from shoes to polio, lemon trees to rivers, death to life that melds into one beautiful, luminous work of art.'The Secret World of Connie Starr will set the literary firmament ablaze. This brilliant, quintessentially Australian ode to difference, transcends time and place - it's an achingly lovely tale that shines long after the last page.' Karen Brooks, author of The Good Wife of Bath 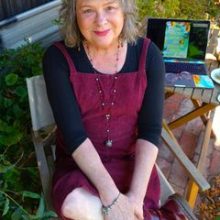 Robbi Neal's first book SUNDAY BEST, a memoir was developed as part of the HarperCollins/Varuna awards program and published by HarperCollins in 2004. AFTER BEFORE TIME, which told stories of indigenous life in a remote community, was published in 2016. THE ART OF PRESERVING LOVE, a story that spanned 25 years from 1905 to 1930 was published in 2018 under the pen name Ada Langton. Robbi also paints and is currently working towards an exhibition scheduled for 2022 at Redot Fine Art Gallery, Singapore. She is a mama of five wonderful humans (you're welcome world). She has lived in country Victoria, Australia, for most of her life and lives only a few of blocks from where her novel THE SECRET WORLD OF CONNIE STARR (2022) is set. She loves to walk down Dawson Street past the church her grandfather preached in, the same church with the same columns that appear in in this book. When Robbi isn't writing, she is painting, or reading or hanging out with her family and friends, all of whom she adores. She loves procrasti-cooking, especially when thinking about the next chapter in her writing. She also loves cheese, any cheese, all cheese and lemon gin or dirty martinis, the blues, and more cheese. 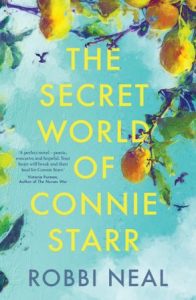 The Secret World of Connie Starr