Louise Fein Shares the Inspiration Behind her Tremendous Debut, People Like Us The inspiration behind People Like Us was the experience of my father’s family who escaped from 1930’s Nazi Germany and came to the UK as refugees. I knew very little about their experience before I embarked on the project, and as such inherently knew that the book would be a work of fiction. My interest in the story was not to write about the Holocaust, which has been much (and importantly) explored in literature, but rather I wanted to focus on the psychology and events which led to it.

My research was extensive! I began by reading widely about the era, both non-fiction and fiction, memoirs and personal stories. Then I honed-in on areas I wanted to explore further. In particular, I wanted to read as much contemporaneous material as possible, rather than information written with the benefit of hindsight. This included published diaries, translations of speeches and newspaper reports, as well as ploughing through Mein Kampf which I found particularly difficult to read. I also read published theses of specific areas of interest and had the benefit of around twenty-four boxes of family archive material. This included letters, journals, official documents etc. Finally, I travelled to Leipzig on a couple of occasions with my German-speaking sister and explored the area my father’s family lived and met with various experts on the Third Reich.

It would reveal that I’ve been carrying out research for my third book (which I can’t say too much about at this point!); that I have been looking for a bird feeding table (I do love the wildlife around my house!) and searching for some clothes for my son and two daughters. I wouldn’t ordinarily be shopping for clothes on-line, but these are not ordinary times so my internet history might be a little different of late!

What are you hoping the reader will take away from People Like Us?

I hope that readers will consider how easy it can be to indoctrinate hearts and minds. How, by being in echo-chambers which enforce and re-enforce the same messages, it is very easy to believe they are truth and right. That we must be prepared to listen to dissent and to have open discussion with people whose views are different to our own. I hope people will see how fragile freedom really is and how quickly democracy can fall if it isn’t protected. And above all, I hope people will remember that we are all human, and that there is far more about us that is the same and which connects us, than that which is different and divides us. Also, I hope to emphasis the strength in the power of love, and of kindness to one another.

People Like Us is my debut novel, but I have written my second book, and am embarking on my third. In some ways the process becomes easier in that you understand more about how to structure a book and perhaps when things aren’t working, why that is. However, every book is a very different beast, and each throws up its own challenges and complications. But this is also what makes the job so interesting and exciting!

Right up there with holding my babies for the first time. Indescribably thrilling.

What was the most challenging part of writing People Like Us?

One of the biggest challenges was because I chose to write this book from the point of view of someone who believed in the Nazi dream with almost religious fervour (which many people at the time did). How could I gain the sympathy of readers for a person with such reprehensible views and keep their attention? The solution to this was to have my protagonist very young and innocent. It wasn’t her fault that she was brainwashed by the adults surrounding her. Her voice in the book then had to change and develop as she got older, which was also a challenge! I rewrote the early parts of the books many, many times until they felt right!

The book title came from something Hetty, the main protagonist’s mother says to her early on. She says ‘…Stick only with good Germans, like us…’ The title has several meanings in relation to the book – the idea that groups of people, ‘us’, are better than other groups of people; the concept that actually all people are the same; and the fact that Hetty and Walter themselves are a couple who cannot be together due to the times they live in, are also ‘people like us’. In America they have gone with a different title for the same book – Daughter of the Reich. This often happens as different titles appeal to different markets!

The biggest influences on me as a writer are other wonderful books! I think to be a writer you have to be an avid reader. The ability to tell a story and when and how much to reveal come from reading other brilliant books. From reading you can learn how to build character, tension and dialogue. There are certain things you can learn from courses, but much of writing comes from the unconscious aspects you learn through reading.

There are days when the words flow, I’m pleased with how the book is progressing, and being a writer feels like it’s the best job in the world. Being able to write at home in pyjamas if I want to, is an added bonus. Other days can be torture. I think being creative, day after day when a deadline is looming can be exhausting and difficult, as is balancing the creativity with managing the ‘other’ things which come with the job, e.g. publicity, social media etc. But those days where everything goes well, and ultimately holding that finished product in my hands are the things which keep me going. That, and hearing from readers around the world who have enjoyed reading my book is the best feeling ever! Read an Extract of Louise Fein's Compelling New Historical Novel, People Like Us 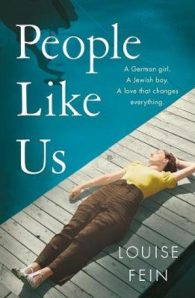 A love story set in 1930s Germany. Hetty, daughter of an SS officer, falls in love with Walter, a Jew – but will the steady march of dark forces destroy their world, or can love ultimately triumph? 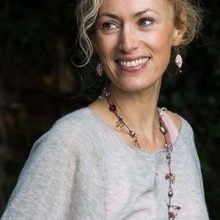 Louise was born and brought up near London. After a law degree at Southampton University, she worked in Hong Kong and Australia, and enjoyed travelling the world before returning to London to settle down to a career in law and banking. She holds a master’s degree in creative writing from St Mary’s University, London. Louise lives in the beautiful Surrey countryside with her husband, three children and small dog. 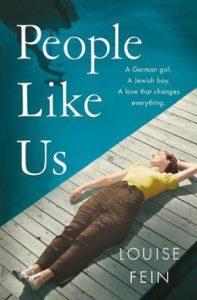