Love, Resilience, Courage: Read an Extract from Daughters of the Resistance by Lana Kortchik A hundred kilometres from occupied Kiev, lost in the snowdrifts and evergreen pines, a freight train crawled through the Ukrainian countryside, carrying Lisa Smirnova to a certain death. As she huddled in the corner, feet numb and hands trembling, she could feel other bodies pressing into her with every motion of the train, enveloping her in a putrid cloud of sweat, urine and worse. Her face damp with tears, she thought of her family, who would never know what had happened to her. She thought of her life before the war, of sunshine and happiness, gone without a trace.

But most of all, she thought of a small sandwich she had left on the kitchen table of her communal apartment that morning. She had prepared the sandwich lovingly out of some stale bread and a smear of butter she’d managed to find at the market. Having forgotten what butter looked, smelt and tasted like after a year and a half of occupation, she had been more than happy to part with the silver bracelet her father had given to her for her eighteenth birthday just to hold the tiny white ball in her hands.

To Lisa, it was more than dinner for one night. The butter was a sign. God had sent this miracle her way to tell her she no longer had anything to fear.But, of course, there was plenty to fear and now the sandwich remained in the kitchen in plain sight of her neighbours. How long before someone noticed it and claimed it for their own? Not that it mattered, because Lisa wasn’t coming back. As she stared into darkness that was alive with sound – groans, sobs and occasional laughter – she berated herself for being so short-sighted.

She should have devoured the butter right there, at the market, instead of taking it home and trying to pretend she was a regular girl living a regular life in a place that hadn’t been twisted and torn by Hitler’s Army Group South. At the very least, she should have hidden the sandwich in her pocket when she heard the hated Nazis knocking on the door of the apartment she shared with five other people, young and afraid, just like herself.

Had she done that, she wouldn’t be so mind-numbingly hungry right now. Everything looked different on a full stomach. Maybe if she’d eaten the sandwich, the future wouldn’t appear so grim to Lisa…

Buy a copy of Daughters Of The Resistance here. 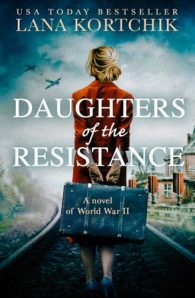 A heart-wrenching novel of love, resilience and courage in World War II, from the author of Sisters of War – perfect for readers who loved The Tattooist of Auschwitz and The German Midwife. Ukraine, 1943On a train from Ukraine to Germany, Lisa Smirnova is terrified for her life. The train is under Nazi command, heading for one of Hitler’s rumoured labour camps. As she is taken away from everything she holds dear, Lisa wonders if she will ever see her family again.In Nazi-occupied Kiev, Irina Antonova knows she could be arrested at any moment. Trapped in a job registering the endless deaths of the people of Kiev, she risks her life every day by secretly helping her neighbours, while her husband has joined the Soviet partisans, who are carrying out life-threatening work to frustrate the German efforts.When Lisa’s train is intercepted by the partisans, Irina’s husband among them, these women’s lives will take an unimaginable turn. As Irina fights to protect her family and Lisa is forced to confront the horrors of war, together they must make an impossible decision: what would they be willing to lose to save the people they love?

LANA KORTCHIK grew up in two opposite corners of the Soviet Union – a snow-white Siberian town and the golden-domed Ukrainian capital. At the age of sixteen, she moved to Australia with her mother. Lana and her family live on the Central Coast of NSW, where it never snows and is always summer-warm, even in winter. She loves books, martial arts, the ocean and Napoleonic history. Her short stories have appeared in many magazines and anthologies. She is the author of the USA Today bestselling Sisters of War. 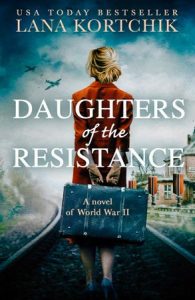 Daughters Of The Resistance