A quest of determination: Read our review of The Forest of Moon and Sword by Amy Raphael Helping people to heal isn’t about magic, it’s about compassion.

Twelve-year-old Art lives in a cottage in the small village of Kelso, Scotland with her mother. After her father, brother, and beloved cat Malkin had all gone, Art’s mother was the only person she had left. However, in 1647, the men of Scotland were in fear of women, and accused some of them to be evil witches, casting disastrous spells on people throughout the country.

Art’s mother has always made potions that cure the sick, but now the townspeople say she is a witch. On a dark and cloudless night, Art’s mother is arrested alongside other accused women by Matthew Hopkins’ soldiers – an army dedicated to killing witches. Art is hiding safely in a trapdoor, and reads a letter her mother left her – a letter that sets her off on an incredible journey.

In the letter, her mother instructs Art to live with her Aunt, a woman described as bony, cold and mean – traits that contrast with Art’s mother’s warmth and kindness. After being shunned and shamed by her Aunt, cousins, friends for her difference, Art decides to leave. She mounts her horse, taking her sword, a tightrope, and the herbal recipe book, and begins a journey through wild forests. As her mother predicted in her letter, Art would have nature’s signs and symbols to guide her along the way, if she can figure them out.

The Forest of Moon and Sword is a lyrical adventure with folklore at its heart. Readers learn about the importance of self-belief and the magic of nature. Art’s is determined and compassionate, as she tackles the many hurdles along her journey, and shows we are never truly alone through her connections to animals. Art makes new friends who help her on her quest, through whom we learn that differences are valued and how love and kindness will ultimately prevail.

The author, Amy Raphael, is a British writer and critic who resides in Brighton with her daughter. Amy has worked for the likes of Elle, Esquire, Rolling Stone, and all the British broadsheets and more. Her gripping storytelling in The Forest of Moon and Sword perfectly introduces middle-grade readers to big topics from PTSD (post-traumatic stress disorder) to monarchy to the history of smallpox and the plague, in a digestible way.

Reading this book, I felt as though I was truly seeing the world Amy created through Art’s eyes. This is credit to Amy’s captivating writing coupled with August Ro’s vivid illustrations that allows middle-aged readers aged 8+ to fully immerse themselves in this magical world, prompting them to use their imagination to its full capacity. 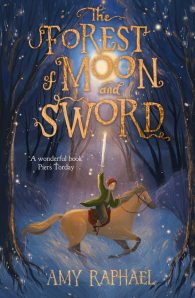 When Art's mother is accused of witchcraft and captured, she is determined to get her back - at any cost. A lyrical adventure with folklore at its heart, for fans of THE HOUSE WITH CHICKEN LEGS. Twelve-year-old Art lives in a small village in Scotland. Her mother has always made potions that cure the sick, but now the townspeople say she is a witch. One cloudless night, Art's mother is arrested and taken to England. Art mounts her horse, taking a sword, a tightrope, and a herbal recipe book, and begins a journey through wild forests, using nature's signs and symbols to guide her. 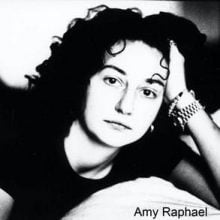 Amy Raphael is a British writer and critic who has worked for The Face, Esquire, Elle, NME, Rolling Stone and all the British broadsheets. Her books include Danny Boyle in Conversation with Amy Raphael and Mike Leigh on Mike Leigh. She co-wrote Easily Distracted, Steve Coogan's autobiography, and worked with David Hare on his memoir, The Blue Touch Paper. She lives in Brighton with her daughter. 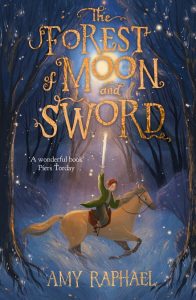 The Forest of Moon and Sword