A Rip-Roaring Adventure: Read Our Review of Loki: A Bad God’s Guide to Being Good by Louie Stowell Packed with doodles and cartoons, here is the diary of Loki as he’s trapped on earth as a petulant eleven-year-old – and even worse, annoying thunder god Thor is there, too.

After one prank too many, trickster god Loki has been banished to live as a kid on Earth. If he can show moral improvement within one month, he can return to Asgard. If he can’t? Eternity in a pit of angry snakes. Rude!

To keep track of Loki’s progress, King Odin (a bossy poo-poo head) gives him this magical diary in which Loki is forced to confess the truth, even when that truth is as ugly as a naked mole-rat. To make matters worse, Loki has to put up with an eleven-year-old Thor tagging along and making him look bad.

Loki is not even allowed to use his awesome godly powers! As Loki suffers the misery of school lunch, discovers the magic of internet videos, and keeps watch for frost giant spies, will he finally learn to tell good from bad, trust from tricks, and friends from enemies?

Loki: A Bad God’s Guide to Being Good is Louie Stowell’s latest rip-roaring novel packed to the brim with witty text, hysterical drawings and a god who’s in a lot of trouble. Stowell manages to tell a compelling and heart-warming story while keeping you in stitches from start to finish.

Loki is forced to be completely honest in his diary, and it was intriguing to see how even a godly figure like himself struggles to fit in and find their place. Even though he’s mischievous, I loved Loki as a character, always trying to prank his way out of trouble.

Stowell’s cartoonish doodles are a fantastic addition to the novel and add some truly hilarious moments. The novel is presented as a diary, following Loki’s punishment for his pranks. We see all kinds of doodles and sketches (and even a few jokes) alongside the text, which made each page a visual treat.

Buy a copy of Loki: A Bad God’s Guide to Being Good here. Teacher's Notes: Loki: A Bad God’s Guide to Being Good by Louie Stowell Activity Pack: Loki: A Bad God’s Guide to Being Good by Louie Stowell Loki like You’ve Never Seen Him: Read an Extract from Loki: A Bad God's Guide to Being Good by Louie Stowell 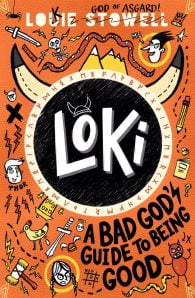 Ages 9+Wry, witty and very funny diary-style story packed with doodles and comic strips about the frustration trickster god Loki feels at having to live trapped in the body of a weedy eleven-year-old boy.After one trick too many, Loki is banished to live on Earth as a “normal” school boy. Forbidden from using his AWESOME godly powers, Loki must show moral improvement. As he records his lies THE TRUTH in his magical (judgemental) diary, it becomes clear Loki hasn’t a clue how to tell good from evil, trust from tricks, or friends from enemies. 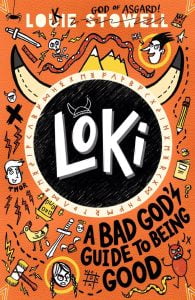 Loki: A Bad God's Guide to Being Good