Grade Six Survival Guide #2: Read our Review of A Class Full of Lizards by Alison Hart Alison Hart has written the perfect follow up to her debut novel, and it’s an insightful, hilarious journey inside the head of a Year Six student. The characters we know and love from the first book, School Rules Are Optional, are approaching the end of their primary school years. The completely relatable humour tackles big issues as Jesse and his friends navigate the different emotions and challenges of the impending transition.

For example, decisions are being made about which high school they will attend. This particularly affects Jesse and his best friend Alex. Both are smart in different ways and by the end of the book, we see that the two boys understand that intellectual results are only one measure of success.

Jesse is an “everyman” kid with good values and kind behaviours. He is empathic, thoughtful and a bit of a worrier. His challenges include managing the relationship with his precocious prep buddy, finding ways around his family’s disgusting new health kick, a group project that goes awry, training for the annual cross-country race, and a lizard in the school playground that seems to be expanding alarmingly. The small details of every school life are perfectly captured.

I laughed out loud at the descriptions of Jesse’s tactics to cope with his Mum’s new enthusiasm for healthy family food. I’m pretty sure my own children would be rolling their eyes and relating to these scenes:  the inedible salads, the same piece of fruit appearing in the lunchbox each day, the relief of escaping to the grandparents for scones, jam and cream. Jesse’s Dad’s efforts with lycra and fitness are also a recurring theme throughout the book, and Alison Hart’s sharp observations will ring true for many families.

As an adult reading this book, it bought back memories of this time of my own school life and how formative those experiences were. There is an edge to Alison Hart’s writing that makes me read very attentively, especially the descriptions of adult behaviour written from a child’s point of view. Much of the adult behaviour mystifies Jesse, and it made me really examine my own behaviours, interactions, and explanations. Too often we believe that we are easily understood by those around us and much goes unsaid.

Alison Hart shows the gaps in understanding between students and teachers, and children and parents. Sometimes these gaps lead to comical misunderstandings between characters, but there are also some tender moments when true connection happens.

Alison Hart says: “When my daughter reached late primary school, I was transported back to a place I not only remembered but had no trouble expressing in words. I thought I’d write a character that appealed to me. Jesse started as a cheeky, naughty troublemaker that gradually morphed into an anxious over-thinker with every redraft. He is a marked improvement on me as a kid though. He’s smarter, more compassionate and he learns from his mistakes. That’s the best thing about writing fiction. It’s fiction – you get to make it up. Many of the storylines are taken from mine and my daughter’s experiences. The everyday can be the most entertaining and bizarre, depending on how it’s presented to you.”

I would recommend this book for readers 10+, fans of Diary of a Wimpy Kid and any adult who fondly remembers their upper primary school years. Precocious preps, St Brainiacs and Other Challenges: Read an extract from A Class Full of Lizards: The Grade Six Survival Guide 2 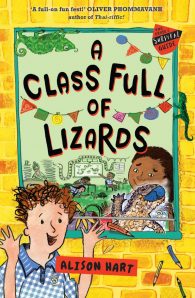 In this hilarious sequel to School Rules are Optional, Jesse is back with even more hysterical antics as he navigates the worst family health kick ever and the chaotic end of Grade Six. It's my first day back at school after the holidays and I've already got three burning questions: 1) When is my family's disgusting diet going to end? 2) How will I finish my group project on time? 3) Why is my best friend Alex suddenly not talking to me? If that's not bad enough, the classroom is overrun with lizards. At least things can't get worse, right?

Alison Hart lives at the foothills of the Dandenong Ranges with her daughter and lots of animals, wild and domestic. The house block is so steep, you have to go down two sets of steps to get to the front door. It's nice and quiet for writing, but also a bit distracting because the view is really good. In her spare time, Alison likes reading, watching old movies, and opening and closing the door for the cat. Besides writing, Alison works in community aged care. School Rules Are Optional is her first novel. 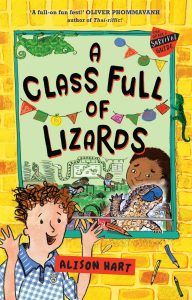 A Class Full of Lizards: The Grade Six Survival Guide 2