Lesley Kara’s, Who Did You Tell? is Totally Addictive Every town has its secrets. Lesley Kara knows them all . . .

Lesley Kara had a breakout hit with The Rumour, 2019’s biggest crime thriller debut. Who Did You Tell? is her eagerly awaited follow-up, and destined to also be a hit. It’s totally addictive.

Astrid is a recovering alcoholic. It’s been 192 days, seven hours and fifteen minutes since her last drink… Since then, she started trying to turn her life around. It’s not easy. The urge to drink is strong. So is the urge to escape. She has reluctantly moved back in with her mother, in a quiet seaside town away from the temptations and painful memories of her life before, and is focusing on her recovery. A new life and person.

Astrid was a set designer before her life fell apart, but hasn’t worked in seven years. She meets Josh, and there’s an attraction there, but she doesn’t want to tell him, or anyone new, about her past or her struggles. However, there’s a room at his father’s house that he encourages her to paint, a step back towards the work she’s passionate about.

Astrid is also going to meetings. Confessing her misdeeds. Making amends to those she’s wronged. She struggles with the 12-steps – she doesn’t believe in God. But she goes anyway, getting to know other members slowly over time, especially Rosie and Helen.

But there are also the disturbing visions she’s having that are messing with her head… of her ex-boyfriend Simon. A glimpse. His smell. She has changed her life completely but it doesn’t seem to be enough to escape the past. And someone knows exactly what Astrid is running from. And they won’t stop until she learns that some mistakes can’t be corrected.

The easy, polished prose helps this book zing alone, but there is a surprising amount of depth in Astrid’s character, with her alcoholism and her pain. She’s quite complex, as her issues would suggest, but you certainly feel for her and want her to beat her demons and find happiness. There are also themes around suicide, which may not be for everyone, but add to the darkness and sense of despair around the protagonist.

All that aside, Who Did You Tell? is one of those excellent page-turners that are great as weekend reads. You’ll devour this in a sitting or two, desperate to know more about Astrid, what happened to her and Simon, and who is tormenting her now. Filled with surprising twist and turns, it will keep you hooked and guessing to the very end. Try a Chapter of Lesley Kara's Sensational New Thriller, Who Did You Tell? The Dangers of Gossip: Q&A with Lesley Kara on her debut novel The Rumour Red-Herrings and Clues to be Solved: Read an extract from The Rumour by Lesley Kara Gripping, Intense, Emotional: Review of The Rumour by Lesley Kara 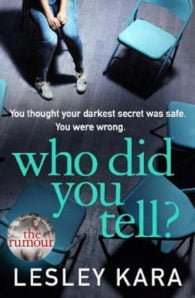 You thought your darkest secret was safe.You were wrong.The addictive new stand alone psychological thriller from the bestselling author of The RumourEvery town has its secrets. Lesley Kara knows them all . . . From the author of 2019's biggest crime thriller debut, The Rumour, comes an addictive new novel . . . It’s been 192 days, seven hours and fifteen minutes since her last drink. Now Astrid is trying to turn her life around.Having reluctantly moved back in with her mother, in a quiet seaside town away from the temptations and painful memories of her life before, Astrid is focusing on her recovery. She's going to meetings. Confessing her misdeeds. Making amends to those she's wronged.But someone knows exactly what Astrid is running from. And they won't stop until she learns that some mistakes can't be corrected.Some mistakes, you have to pay for . . . 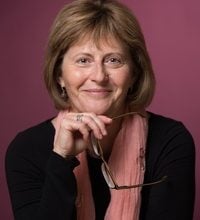 Lesley Kara is an alumna of the Faber Academy ‘Writing a Novel’ course. She completed an English degree and PGCE at Greenwich University, having previously worked as a nurse and a secretary, and then became a lecturer and manager in Further Education. She lives on the North Essex coast.The Rumour is her first novel. 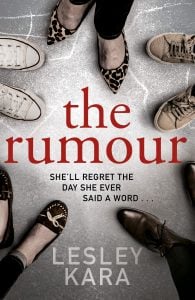 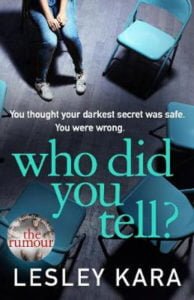 Who Did You Tell?