The Lizard by Dugald Bruce-Lockhart is a Suspenseful Page-Turner The Lizard is a suspenseful page-turner by British actor Dugald Bruce-Lockhart. Set in Greece in 1988, it’s the perfect read for anyone dreaming of summer sun and escapist fun. It’s Dugald’s debut novel, and yet another great addition to the high-quality debuts we’re seeing this year.

It opens with Alistair Haston arriving in Greece. We quickly get a sense of who he is – broke, student, heartbroken and obsessed by a breakup with his first girlfriend. She’d been asking him to go to Greece with her all semester. Alistair had taken his time to consider this trip – clearly he’s cautious by nature ­– but finally he agreed, only to have her dump him.

“According to Ellie I was too eager to please. Unable to make a decision; not my own man.”

So Alistair follows Ellie to Greece to rekindle their relationship. But on arrival, he’s mugged and loses everything. Fortunately, he meets Ricky; a magnetic Australian called ‘the Lizard’, who offers him a cushy job on the island of Paros, recruiting tourists to pose for his wealthy artist boss. Alistair accepts and doesn’t take long to discover that it is not just painting the boss has in mind.

Soon swept away in a cocktail of hedonistic pursuits, Haston is immersed in a sun-drenched world of sex, alcohol and drugs. But when the body of a missing tourist is found, all evidence points to Haston. In fact, the body count really piles up. Haston is arrested and jailed but eventually escapes and finds himself on the run by land and sea, on a journey more breathtaking and more frightening than he could ever imagine.

Dugald has an impressive theatre background, so I went into this read rather expecting someone with a flair for character dialogue and a novel driven by that. Instead, I found it’s narrated in the first person, while other dialogue is minimal – although extremely realistic when it’s there. His choice here adds to the intensity of the read, giving you a real connection to Alistair and a bird’s eye view of the action. And there is a lot of that.

The Lizard is a tightly plotted story, with our protagonist taking a journey that is not just geographical but internal as well. The lovesick young man we meet in the opening pages is not the Alistair we know well at the end of the book. And what an end!

I predict we’ll be hearing a lot more from Dugald Bruce-Lockhart. He’s delivered one hellova debut. I’m looking forward to what he writes next. Summer Sun and Escapist Fun: Read an Extract from The Lizard by Dugald Bruce-Lockhart 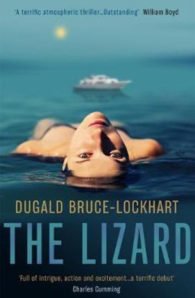 Obsessed with his ex-girlfriend, Alistair Haston heads off to Greece, where she is on holiday, to try and rekindle their relationship. On the ferry from Athens he is offered a lucrative job, recruiting tourists to pose for and, he later discovers, to sleep with, Heinrich a wealthy and charismatic, German artist Swept away on a tide of wild parties, wild sex, fine food and drugs Haston sheds his reserve and throws himself headlong into the pursuit of pleasure. Until, a body is found and the finger of blame points to Haston. His world collapses. Arrested but allowed to escape, the body count piles up and Halston finds himself on the run by land and sea on a journey more breathtaking and more frightening than his wildest dreams. 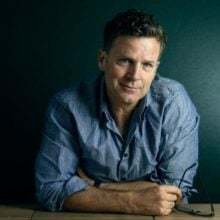 Lockhart began as a stage actor, working with the Royal Shakespeare Company, the National Theatre and others. Since 1998, he has acted mostly with Propeller, an all-male theatre company of which he is now an associate director. He is also an associate of the Teatre Akadèmia Theatre Company in Barcelona and has directed Romeo and Juliet and As You Like It in Catalan, using new translations by Miqel Desclot. He teaches and directs at drama schools in London, including the Royal Central School of Speech and Drama, LAMDA, and the Italia Conti Academy of Theatre Arts.He played David Cameron in The Three Lions, a comedy written by William Gaminara, a role for which he was nominated as best actor by The Stage at the Edinburgh Festival of 2013. Lockhart returned to the role when the play was later staged at the St James Theatre, London, in 2015, and stayed with the production when it moved on to the Liverpool Playhouse.He is now an author of a handbook for actors called Heavy Pencil, and his newest book, The Lizard. 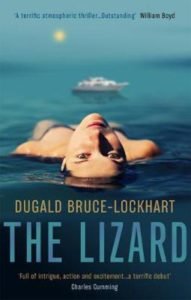