Witty and relatable: Read our review of Pizazz vs the New Kid by Sophy Henn Being a superhero is the best thing ever, right? Wrong! Pizazz is a superhero, and while it sounds pretty awesome and while it can be, Pizazz finds it REALLY annoying! She doesn’t like her name and thinks her superpower isn’t cool at all.

Her first 5 months at this new school in this new town weren’t the easiest – especially when she has ‘the populars’ to deal with – but she’s finally gotten into the swing of things and found her crowd, despite being the only superhero at school.

But now a new kid has showed up, and started wowing everyone with their super powers. Yep, SUPER POWERS – just what this town needs, another super… who just happens to have the coolest name ever: Jett. Now, Serena and her gang of Populars, Pizazz has to compete against Jett in an almighty and ultimate super-off. Will Pizazz lose? Is there space for two supers in this school?

Sophy Henn is an award-winning picture book author and illustrator. She’s the creator of the much-loved Bad Nana series, and Pom Pom series, among others. Her debut picture book Where Bear? was nominated for the Kate Greenaway Medal and shortlisted for the Waterstones Children’s Book Prize. Sophy was also the World Book Day Illustrator in 2015 and 2016. Through the Pizazz series, we can clearly see why she is deserving of these titles and nominations.

Sophy’s choice to write the series as a comic is appropriate for its audience of newly independent readers aged 7+, which both shows and tells where the storyline is headed. What struck me most as a reader was how relatable Pizazz’s witty characterisation and voice are. In a comical way, Pizazz vs the New Kid highlights the reality of embarrassing moments, embarrassing parents, and trying to fit in at school.

While Pizazz may be a superhero and she might not like her superpowers, her true power is her ability and strength to be there for people – whether they’re superheroes or regular people – and her normalcy makes this relatable to young readers.

This book sends the important message that people should come together and celebrate their similarities (rather than rival over them) and their differences. This could be as simple as making a change in your school and home life, or something as huge as saving the planet – literally, in Pizazz’s case. Kindness, strength and giving back are traits that encapsulate a true superhero – and Pizazz is all of that, and more. Ready for a super-off? Read an extract from Pizazz vs the New Kid by Sophy Henn Inspiration and advice: Q&A with Sophy Henn, author of Pizazz vs the New Kid Become a superhero: Activity sheet from Pizazz vs the New Kid by Sophy Henn 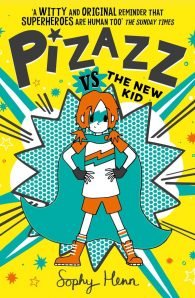 BEING A SUPERHERO IS THE BEST THING EVER, RIGHT? WRONG! HELLO! My name is PIZAZZ and I’m a superhero . . . You probably think that’s really AWESOME, and while it can be, it’s also REEEEEEEAAALLLLY annoying. I guess it was sort of going OK (I say, “sort of” – I still have to wear a silly cape and save the world all the time) until this NEW KID showed up, and started WOWING everyone with their superpowers. Yep, SUPERPOWERS – just what this town needs, another super . . . Who just happens to have the coolest name ever: Jett. And now, because of Serena and her gang of Populars, I have to compete against Jett in an almighty and ultimate SUPER-OFF. But it’s fine. I mean, even if I lose, there’s space for two SUPERS in this school, isn’t there?! 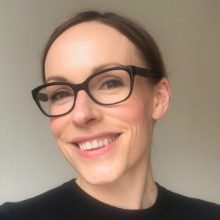 Sophy Henn is the acclaimed picture book maker behind Where Bear?, Pass It On, Edie, and the adorable Pom Pom series. She studied at Camberwell and Central Saint Martins, and is a graduate of the MA in Sequential Illustration at the University of Brighton. Her debut title, Where Bear?, was shortlisted for the AOI Illustration Awards 2014 and the Waterstones Children's Book Prize 2015. Her subsequent titles have gone on to great success, and Sophy was chosen as the World Book Day illustrator in 2015. Sophy is letting her wicked side out in this exciting new series for slightly older readers! 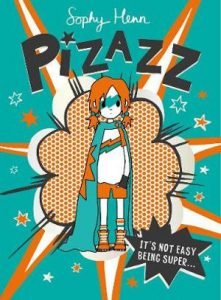 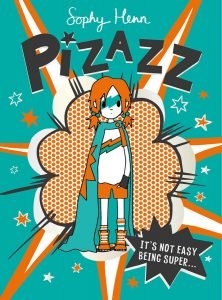 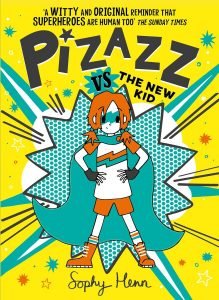 Pizazz vs the New Kid 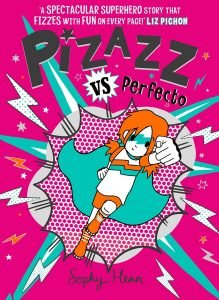