My little cousin Ivan is innocent – he is a baby, and as pure as only a one-year-old can be. But tonight, at my order, the infant Tsar will be declared guilty as charged.

I fight the urge to pick him up and kiss him; it would only make things worse. Beyond his nursery door there is a low buzzing sound, like that of angry bees ready to swarm the Winter Palace. Soldiers’ boots scrape and shuffle. Spurs clink like stubby vodka glasses and bayonets are being fixed to muskets. These are the sounds of things to come. The thought spikes my heart with dread.

There is no other choice. It is Ivan or me. Only one of us can rule Russia, the other one condemned to a living death. Reigning Russia is a right that has to be earned as much as inherited: he and my cousin, the Regent, doom the country to an eternity under the foreign yoke. Under their rule the realm will be lost; the invisible holy bond between Tsar and people irretrievably severed.

I, Elizabeth, am the only surviving child of Peter the Great’s fifteen sons and daughters. Tonight, if I hesitate too long, I might become the last of the siblings to die… A Sumptuous Historical Epic: Read our Review of The Tsarina’s Daughter by Ellen Alpsten 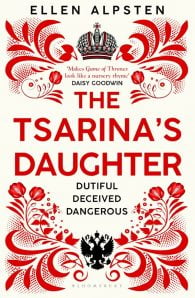 When they took everything from her, they didn't count on her fighting to get it back. Born into the House of Romanov to the all-powerful Peter the Great and Catherine I, beautiful Tsarevna Elizabeth is the world's loveliest Princess and the envy of the Russian empire. Insulated by luxury and as a woman free from the burden of statecraft, Elizabeth is seemingly born to pursue her passions. However, a dark prophecy predicts her fate as inexorably twined with Russia. When her mother dies, Russia is torn, masks fall, and friends become foes. Elizabeth's idyllic world is upended. By her twenties she is penniless and powerless, living under constant threat. As times change like quicksand, an all-consuming passion emboldens Elizabeth: she must decide whether to take up her role as Russia's ruler, and what she's willing to do for her country – and for love. 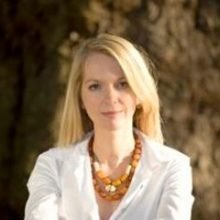 Ellen Alpsten was born and raised in the Kenyan highlands, before attending L'Institut d'Etudes Politiques de Paris. Whilst studying for her Msc in PPE she won the Grande École short story competition with her novella Meeting Mr. Gandhi and was encouraged to continue writing. Upon graduating, she worked as a producer and presenter for Bloomberg TV in London. She contributes to in ternational publications such as Vogue, Standpoint and Conde Nast Traveller. Her debut novel Tsarina was published by Bloomsbury in 2020. She lives in London with her husband and three children. 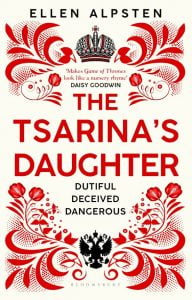