Your Preview Verdict: Death Leaves the Station by Alexander Thorpe A nameless friar turns up at Halfwell Station at the same time that Ana, the adopted daughter of the station owners, discovers a body in the desert during her midnight walk. But when Ana returns to look for it, the body is gone.

Death Leaves the Station brings the cosy country-house intrigue of crime fiction’s golden age to the Australian wheatbelt, and was written for fans of classic mystery and crime fiction.

The book is riveting and keeps you guessing. Told in a way that we truly see a glimpse of a historical era that although seems long ago, we still debate similar ideologies and prejudices. The development of the characters, in particular, our friar is faultless! – Constance, NSW, 5 Stars

I was blown away by Death Leaves the Station! It gripped me fast with its realistic characters and detailed prose, and it didn’t let me go until the final page. I was impressed to find out this is a debut novel – it was so polished and well written that I thought it was by a seasoned author! I loved the whodunnit plot that kept twisting and turning right to the end, and I enjoyed the Australian setting and the snapshot of what life was like back in the 1920s. The characters were also complex and fascinating (especially the friar). I look forward to hopefully seeing more from this author in the future! – Lisa, VIC, 5 Stars

Beautiful written, this novel magically transports you to the vast West Australian landscape in the 1920s. Rich with historical references to Australian yesteryear and mystery. This book will not disappoint! I’d love to see this on the screen! – Dianne, SA, 5 Stars

Alexander Thorpe’s debut novel is a fun, fast-paced adventure straight into outback Australia. Set in 1927, it explores the relationships between an unlikely group of people forced together under suspicious circumstances, and how their secrets are uncovered as the mystery unravels. The characters are easily likeable, the story well-paced, and Thorpe’s beautifully descriptive prose makes you feel the outback sun on your back and the dust in your throat as you read along. It is the perfect story to curl up with, on the lounge with a cup of tea in hand as you read in anticipation for the final development to expose whodunit. The twist at the end is well thought out, unexpected and unusually charming for a murder mystery. Overall, it was an enjoyable and exciting read, and I cant wait to see what else this author has in store for us. – Shontel, NSW, 5 Stars

Thorpe creates instant intrigue with a nameless friar, a plucky young woman, a native tracker and a pompous detective sergeant who set off to locate a missing corpse, and then pursue a murderer. His rendering of era and setting is excellent. With its strong Arthur Upfield flavour, this is a very impressive historical crime debut novel. More, please! – Marianne, NSW, 5 Stars

Halfwell station is home to Mariana Harris and her adoptive parents Ruth and Neville Harris, its 1927 and Mariana discovers a body that vanishes, with the police a native tracker and a mysterious friar the search is on to find the body, this book takes the reader on a journey from the outback to the city a great read I thoroughly enjoyed. – Deborah, NSW, 5 Stars

‘The truth will not be hidden forever. If you do not seek it, it will seek you.’ One night, in the summer of 1927 at Halfwell Station in the wheatbelt of Western Australia, eighteen-year-old Mariana Harris encounters two strangers. The first is a corpse that Mariana encounters during her solitary midnight walk admiring the skies, the second is a nameless friar who calls into the station. But the corpse has disappeared by the time Mariana takes the friar to it, although bloodstained stones remain. The police are called in. Mariana and the friar join the search, together with the powerfully moustachioed Detective Sergeant Arnold Parkes and Cooper the tracker. Their search (which will include Mariana’s third trip in a car) will take them from the goldfields to the city and will uncover several secrets. This is a journey through a racist Australia, where the treatment of Cooper (and others) is particularly uncomfortable. Who does the corpse belong to, who moved it and to where? Mr Thorpe combines an interesting cast of characters and an intriguing mystery (or two). I enjoyed this novel, a comparatively quick read at just under 200 pages. ‘A slow understanding spread throughout the room.’ – Jennifer, ACT, 4 Stars

Set in the 1920s in Western Australia, Death Leaves The Station is an insightful story of mystery and intrigue. Coming in at under 200 pages I would class this as a novella, a quick and easy read which was extremely informative on early Australian life. Halfwell Station hosts the story as a body is found and consecutively lost. This leads the protagonist, eighteen-year-old Mariana Harris on a mission to discover the truth accompanied by a nameless friar who wandered onto the station. Accompanied by the local Detective Sergeant this odd couple travel across the vast Australian outback accompanied by the local aboriginal tracker Cooper in search of the missing corpse. The story shows the plight of the local indigenous people and their unjust treatment, it is quite an eye-opening and a must-read for our younger generation. The mystery unravels with well-woven clues along the way, keeping you engrossed in the story and trying to piece together the conclusion. Death Leaves The Station was an enjoyable read that kept me guessing until the very end, it’s historical content was very thoroughly researched and made the story entertaining with a satisfying finish. Well done to author Alexander Thorpe. – Cassandra, VIC, 4 Stars

Death Leaves the Station, while shorter than most novels, is a great read which keeps you engrossed to the end. Set in the 1920s, the book has been well researched to reflect the times and location, with interesting personalities supporting the lead character, Detective Sergeant Arnold Parkes. Lots of twists in the plot keep you thinking, as do the scattering of not regularly used language which makes it even more interesting. Hopefully, Alexander Thorpe is planning further adventures for Detective Sergeant Arnold Parkes which will no doubt entertain us as much as Death Leaves the Station does. – Jane, NSW, 4 Stars

Death Leaves the Station is a compelling novel that entices you into Mariana’s journey to discovering what happened to the corpse she stumbled across whilst taking a nighttime stroll stargazing in the rugged outback of Western Australia. Mariana, or Ana as she prefers to be called, and her travel companions the mysterious friar, the ill mannered Detective Parks & local tracker Cooper try to leave no stone unturned to find both the corpse & killer. As the story unfolds I was hooked on every word trying to piece together the many secrets until the very last page. – Victoria, VIC, 4 Stars

Death Leaves the Station is the first novel by Alexander Thorpe, released by Fremantle Press. A rich and contextual historical mystery novel, Death Leaves the Station sees author Alexander Thorpe successfully turn back the clock, immersing his audience in 1927, Australia. In this short-form novel, the reader is confronted with a missing corpse, an eighteen-year-old woman determined to locate the missing body, a friar, an offbeat detective and a tracker. This is an eclectic cast, but Thorpe brings to life this unusual group through his solid characterisation. A bush based sojourn ensues, as the group resolve to locate the body that made a strange disappearing act. It is a journey that brings shocks, twists, turns, red herrings and more. The overwhelming sense of isolation that comes from this stark wheatbelt based locale works to heighten the atmosphere of this bush based crime tale. Thorpe ensures that his readership is able to play an active role in solving this perplexing case, thanks to the old fashioned detective work of Sergeant Arnold Parkes and his unlikely search party. Death Leaves the Station is a worthy debut from an up and coming new author. – Amanda, WA, 4 Stars 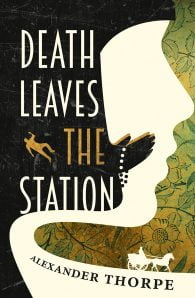 Set in 1927, the story takes all the classic elements of an interwar murder mystery and gives it a distinctive Australian flavour. A nameless friar turns up at Halfwell Station, at the same time that Ana, the adopted daughter of the station owners, discovers a body in the desert nearby when she goes for a midnight walk. But when she returns to look for it, the body is gone. Death Leaves the Station was written for fans of classic mystery and crime fiction. 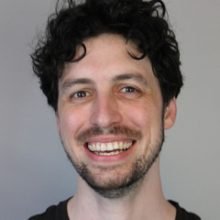 Alexander Thorpe is from Fremantle, Western Australia. He has written advertising copy for pool cleaners and concrete supply companies, taught English in Joseph Stalin’s hometown and almost managed to read half of James Joyce’s Ulysses twice (which is more or less the same as having almost managed to read the whole book). Alex has written for news outlets, travel journals, marketing companies and educational providers, and has recently completed his first novel, Death Leaves the Station. 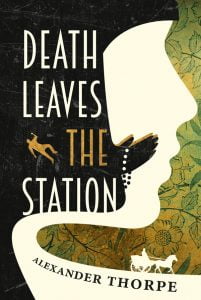