HE DISAPPEARED FOR 15 YEARS… SHE HAS 12 HOURS TO FIND OUT WHY.

After a puzzling death in the wild bushlands of Australia, detective Dana Russo has just hours to interrogate the prime suspect – a silent, inscrutable man found at the scene of the crime, who disappeared without trace 15 years earlier.

But where has he been? Why won’t he talk? And exactly how dangerous is he? Without conclusive evidence to prove his guilt, Dana faces a desperate race against time to persuade him to speak. But as each interview spirals with fevered intensity, Dana must reckon with her own traumatic past to reveal the shocking truth . . .

Hermit by S.R. White is an amazing, mind-twisting ride for people who like a book that keeps you hooked then gasp at the end. Set mostly at the Carlton police station, it is the story of a murdered store owner and who did it. With the suspect, Nathan Whittler, near the victim with his blood on him it’s an open and shut case. However, as Dana Russo interviews Nathan, not all is what it seems. Nathan has been missing for 15 years, so why return and why kill a man for no apparent reason. Hermit will keep you guessing until the end, and the ending will make you truly think about your life and the path we all take. – Terry, NSW, 5 Stars

This book had me invested in Dana Russo from the first page. The author seemed to have a great grasp on the power of human interactions. It took me on a journey of what sometimes lies beneath the veneer of everyday life and the stories behind that veneer. I thoroughly enjoyed the ebbs and flows in the story, with the characters being robust and descriptive adding another layer to the storyline. At times I felt like I was a fellow officer in the police station, thinking about the how’s and why’s of the crime and how it was all connected. The small-town setting in rural Australia was well depicted and realistic as was the terminology used between characters. The dialogue between Dana and Mr Whittler, was entrancing, a slow dance of words and emotions. I thoroughly enjoyed the book and would recommend it to anyone that likes a great crime novel in the same calibre as Jane Harper, Dervla McTiernan and Chris Hammer, with its Australian setting and a plot that kept you guessing right up to the end. An original idea that just seemed to grow steadily to a great finale. – Gillian, QLD, 5 Stars

S.R. White’s Hermit is a fabulous debut novel that grabs you and draws you in right from the first page. Dana, a flawed detective with her own issues threatening to boil over, is tasked with solving a baffling crime. The prime suspect, a mysterious man not seen for 15 years, has seemingly no motive. With the pressure on and the clock ticking, the stories of both Dana and the inscrutable Nathan Whittler are gradually revealed. The parallels and similarities are unexpected and intriguing but ultimately allow their connection to be forged. Fabulous character development and strong suspenseful writing make this a captivating and enthralling read. Personally, I can’t wait for the follow-up! – Jason, VIC, 5 Stars

The suspect, Nathan Whittler, disappeared without a trace fifteen years ago and was found standing over the body in Jensen’s Store. He became the prime suspect in the murder of Lou Cassavette, the store owner. Nathan is taken into custody and questioned by Detective Dana Russo. Nathan is reluctant to give anything away and needs to be handled carefully and patiently in a timely manner. As Dana starts trying to piece together where Nathan has been and why he left originally, and the connection to the victim, a story slowly unravels of what was endured over his life. His brother Jeb is questioned by police and a search of the old Whittler farm helps reveal more pieces to Nathan’s past. As facts are corroborated during the investigation, Dana’s life is running parallel to Nathan’s with the anniversary of her own family secrets which occurred on this very day. This storyline feels like it is written in reverse, but that doesn’t mean that the climax is at the start by any means. An intriguing page-turner that reminds me of a jigsaw puzzle, as the truth comes together piece-by-piece to reveal the reason why the crime happened. – Vicki, VIC, 5 Stars

Hermit, by S. R. White, is an Australian outback crime thriller that has the reader hooked from the very first chapter. Dana Russo is a damaged and intriguing lead detective who needs to unravel a baffling crime. To add to Dana’s difficult task of uncovering the truth that surrounds a new crime scene is the fact that she is dealing with some sort of horrid anniversary that triggers intense raw emotions; the reader learning quickly that she is flawed and struggling with her own issues. The potential key to unlocking the entire mystery is a silent mysterious man, Nathan Whittler, who disappeared from society fifteen years ago only to reappear at the very scene of the crime. S. R. White creates an engaging pace throughout the novel, providing compelling details to keep the reader intrigued and turning the pages. The characters are believable and thought-provoking, especially the unusual affiliation that slowly forms between Detective Dana and Nathan, the Hermit. S. R. White leaves the reader wanting to understand the world of these characters and creates questions surrounding our own personal views on what it means to be part of modern-day society. – Genene, SA, 5 Stars,

My crime reads are usually more on the thriller side but this one really impressed me. A quick start, then a slow psychological burn with a great lead detective and great supporting characters. Loved the rapport between the detectives and their colleagues. The relationship between detective and suspect is like nothing I’ve read before. Definitely a slow burn, but it worked for me. – Hanadi, NSW, 5 Stars

Hermit pulls you in from the first page. It is an engrossing story from the very beginning. The main characters Dana and Nathan, are both flawed, fragile but also quite strong. Their stories run quite parallel so you are drawn in by wanting to know how they ended up the way they are. It was the sort of story that kept me thinking after I put it down making me want to continue reading. It also left some room at the end for a follow up of the same main character which I look forward to. I feel there is unfinished business with Dana and her colleagues. I would highly recommend this book. – Kim, VIC, 5 Stars

I thought I would sit down and have a quick read, which turned into anything but. Hermit had me enthralled. The characters were likely and relatable. I could visualise the town in question, the police station and the corner shop which soon became a focal point. It quickly became apparent that the main character Dana was troubled, she was a brilliant detective, well-liked by her peers, but had an underlying problem. This became more so when she had to interview a suspect called Nathan. The book went into great depth, it became a mind game between the two of them. He opened more to her as the story went along, he somehow felt more comfortable around her. When a new character was introduced, it did not stray from the storyline. I could easily distinguish between who they were, what had happened to them and how they overall relate to the story. As I got more into the book, I had a few scenarios on how it would all end, it was not what I had expected. – Cheryl, VIC, 5 Stars

Hermit is a psychological thriller that I found hard to put down. Straight away the reader is drawn in by the two main characters, Detective Dana Russo and the suspect, Nathan Whittler, the Hermit. They are both complex characters, with many hidden layers that are slowly revealed throughout the course of the day, which is the timeframe the book is set in. The descriptions are so vivid that I felt like I was actually in the interview room with them, feeling their anxiety, the stress of the situation and uncertainty of how things were going to play out. I am so invested in these characters now that I hope to see a sequel, to find out how things end up for both of them. Hopefully, they both can overcome their personal demons. – Maree, QLD, 5 Stars

This book is really captivating. It throws you at points and then it all comes together at the end. This is a really good read. – Jarree, TAS, 4 Stars 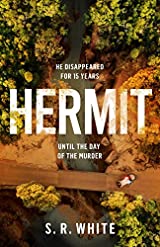 He disappeared for 15 years...She has 12 hours to find out why.Compulsive, atmospheric and stunningly accomplished, Hermit introduces a thrilling new voice in Australian crime fiction, perfect for fans of Jane Harper and Chris Hammer.After the puzzling death of a shopkeeper in rural Australia, troubled detective Dana Russo has just 12 hours to interrogate the prime suspect - a silent, inscrutable man found at the scene of the crime, who simply vanished 15 years earlier.Where has he been? And just how dangerous is he? Without conclusive evidence linking him to the killing, Dana must race against time to persuade him to speak. But over a series of increasingly intense interviews, Dana is forced to confront her own past if she wants him to reveal the shocking truth.

S.R. White worked for a UK police force for twelve years, before returning to academic life and taking an MA in Creative Writing at Nottingham Trent University. He now lives in Queensland, Australia.