Release, my debut novel for an adult audience, is about Gemma Toombs, a 27-year-old woman, who is unable to move forward from her traumatic past of being kidnapped when she was 16 years old; unable to forget the influence of her kidnapper and the wild outback land that he took her to. When she receives notification of her kidnapper’s release from prison in Perth, she knows this could be closure she needs. What she doesn’t yet know is whether she wants revenge or love when she meets him again. She sets forth on a journey towards him – wanting to both hurt and love him – but she must navigate through a physical and emotional landscape that has changed over the ten years since she was last there: she must learn a new path. But will she find the release she so desperately craves?

Release shares DNA with an earlier work of mine, a young adult book called Stolen. Stolen is about the original kidnapping of 16 year old Gemma, narrated from her teenage self. Stolen went on to be published in over 20 countries and became a story that would not let go – of its teenage readership, but also not of me, its author. I knew I would never write a sequel for that book, but as the years moved on, I did wonder what it might be like to revisit the worlds of Gemma and Ty ten years later. As a writer-academic, I am interested in how the passing of time affects the writing process. But it wasn’t just the characters, and their perspectives, that needed to change as a result of time passing.

As I researched, then wrote, Release, I too experienced this same outback land from ten years on, with the new perspective of an older writer who had lived in the UK and worked in English academia since Stolen was published; a woman who had married and considered having children; a woman who had thought about her connection and contribution to the #metoo movement. Release tracked my own journey through my changing sense of self and perspective on the themes of ownership and power in the story, leading me, the writer, to a new adult space.

To my knowledge, this is the first time someone has written an adult book with a link to an earlier Young Adult novel, growing up with her characters. It is a novel that tracks a maturation: of characters, of myself and my writing process, of even the original readers of Stolen.

I hope Release will make readers think. I hope that I have written a story that will stay in their minds long after they finish reading, and will urge them to question notions of truth and perception, the influence of time and place, and also what it takes to find a sense of release. I hope Release, together with my earlier Stolen, may also encourage readers to think about notions of storytelling.

Mostly, I really loved researching this book. The Pilbara land and the western deserts are landscapes very special for me – this harsh and astonishing land blindsides me every time I visit. I can never get my head around their extreme beauty and danger, and the way they make me feel. I have been obsessed by Australian deserts since arriving in Australia as a little girl – they felt like a magic ticket to me; if I could understand Australia’s relationship to its outback heart, perhaps I could understand my sense of belonging to this country too. I wrote Stolen partly to explore this, but my exploration with my relationship with this land wasn’t done there. I wrote Release to explore how my relationship to this land had changed as a result of being away from it for over ten years. Could I feel a sense of belonging to a land that was now becoming distant in my memory?

The research trip back to the Pilbara, the western deserts, and to Perth allowed me to explore all these many feelings and thoughts about land first hand. If I could have written the whole book in situ in the Pilbara, I would have loved to.

I also researched other aspects of this book by spending many hours reading first-hand accounts of kidnap and survival stories, trawling through news reports, and talking with survivors of childhood trauma. I also talked at length with a therapist about PTSD and trauma and how it might present in victim-survivors.

When I worked in England, I had the great fortune of having well-renowned children’s author David Almond as a colleague. David is very wise and very kind. He talks openly about the magic, yet also the struggles, he finds in his writing process. He once told me that beside his desk he has a small post-it note with two words written on it – Be Brave. He said that these two words help him to keep going through the ‘mucky middle’ of a story. I thought at the time that if supremely talented David Almond needs to hear these words on a daily basis, then maybe I do too.

Buy a copy of Release here. A Suspenseful Ride: Read an Extract from Release by Lucy Christopher A Twisted Page-Turner: Read Our Review of Release by Lucy Christopher 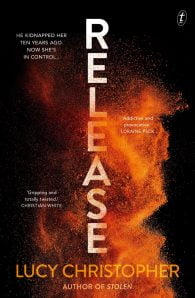 Ten years ago, sixteen-year-old Gemma Toombs was kidnapped from Bangkok Airport by an infatuated drifter, Tyler MacFarlane, who took her to a secret den in the Australian desert. Now her name is Kate Stone and it’s her turn to confront Ty and try to find answers to the questions that have obsessed her since her ordeal. What is the legacy of this coercive relationship? Who holds the cards now? In the confusion of past and present, will Kate remain trapped in a deranged dance of desire and revenge? Or will she regain control and find release?Set in both London and Perth, a courtroom drama and a road trip in the searing heat of the West Australian desert, Release is the story of two people confronting each other, each intent on destruction and survival. A companion to Lucy Christopher’s bestselling novel Stolen, this gripping psychological thriller explores a young woman’s discovery of the complicated truth about a relationship that once seemed alluring.For readers of Gillian Flynn, S.J. Watson and Helen Fitzgerald. 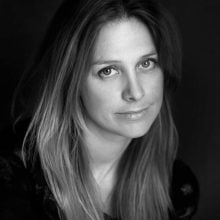 Lucy Christopher is a British-Australian writer, whose first YA novel Stolen was a Michael L. Printz Honor Book, won a 2011 USBBY Outstanding International Book Award, and received the UK’s Branford Boase Award. Lucy has written several other novels for young people, was the director of the MA in Writing for Young People at Bath Spa University, and is now a Senior Lecturer in Creative Writing at the University of Tasmania. Release, a companion to Stolen, is her first novel for adults. When not writing, Lucy spends her time daydreaming, walking dogs, and visiting family and friends spread across the world. She is passionate about the importance of wild environments. 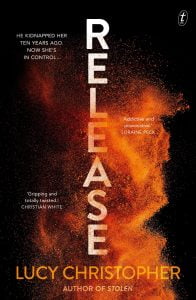