Q&A with John Byron, Author of The Tribute 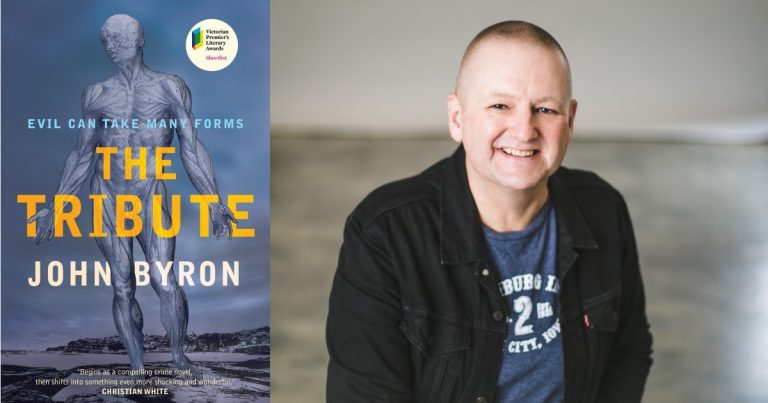 A serial killer at large in Sydney is reenacting scenes from a classic sixteenth-century anatomy text, the Fabrica of Andreas Vesalius of Brussels. The killer’s preparation is impeccable and he seems to have an almost preternatural ability to define and control the scenes of his crimes. In desperation the homicide detective in charge, David ‘Spud’ Murphy, ropes in an art historian in the hope that a fresh angle will open up the case—the art historian being his sister, Joanna King, who is best friends with his wife, Sylvia. As the crimes continue and an election looms, pressure builds and tensions escalate within the police hierarchy, between the siblings and within the Murphy home. As the squad finally closes in on the killer, an even darker element emerges that threatens to blow the investigation apart—and everybody with it.

I grew up in western Sydney in a pretty regular family, but only one generation away from fairly tough, precarious blue-collar work. What you do in that context is grab hold of the highest rung you can, then hang on. So having scored enough in my HSC to get into med school I spent three years there despite my manifest unsuitability for the career. I had this bar job at the time where one of my workmates was a very talented artist obsessed with the Renaissance anatomist Andreas Vesalius and his masterwork, the Fabrica. Once he learned I was a med student this fellow used to talk with me for ages about Vesalius while making these incredible freehand sketches from memory of the various dissection woodcuts. The intensity of his obsession stayed with me long after I left that bar and bailed out of medicine. Later on, I was working in IT to fund my Arts degree, and I came to realise how much information about each of us is swirling around unsupervised. On top of that I had long known that life in many homes is not at all what it seems, often bound up with ways our society frames and values masculinity. Along the way, I have worked in a lot of different workplaces, from a steelworks to the ministerial wing of federal parliament, and the diversity of that experience taught me a lot about some of the fairly basic things we all have in common, despite appearances. So without giving away too much, I guess those different strands and themes coalesced into the storyline of The Tribute.

Pretty bloody good! It’s the manifestation of years of work coming to fruition, thousands of chaotic notes and half-formed ideas over multiple drafts, all so neatly packaged up and polished. But it’s especially true of The Tribute because of the beautiful job Affirm have done with the book design, from the striking cover to the inspired use of typography and the integration of the illustrations. And that, in turn, benefited from the kind permission of the Swiss publishers of the New Fabrica, S.Karger AG of Basel, for the use of their superb fresh renderings of Vesalius’s woodcuts, which are absolutely integral to the story. They even supplied us with the digital files, which was incredibly generous. It’s a gorgeous production and I’m very fortunate that so many people have understood and engaged with the spirit of the novel to produce the look and feel of The Tribute.

My one piece of advice has two parts:

Read! Read all the time—there’s no better training ground for writing than attentive reading. Read deeply within your genre or niche, but also read widely well beyond your own patch. Read what’s recent and coming out now, but also read back into the tradition you hope to join. Read for technique, by all means, but never stop reading just for the sheer bloody pleasure of it.

Write! Write early and write often. Don’t wait for the perfect sentence or the perfect thought, they never arrive fully formed—they start out as half a fragment of a potential gem, and are worked up (or discarded) from there. Don’t wait until you know everything—you don’t really know what you need to learn until after you’ve started writing. Don’t balk at the blank page—make it unblank, propel your hand into motion and at some point, the flow will take over. Write yourself into your character’s point of view, then let them take you wherever they want. And on those days when you just cannot write, do something related— there’s always hackwork to get on with.

The Tribute’s debts are far and wide, even just within the realm of fiction. The Name of the Rose is an obvious one, for the murderous pursuit of obsession, along with Red Dragon, The Da Vinci Code, and the film Se7en. But there are many other influences, across a broad range—Elizabeth Harrower’s The Watch Tower, Charlotte Wood’s The Natural Way of Things, Tim Winton’s The Turning and the ABC television series Wildside are all in there somewhere. A quick survey of my bookshelves would also yield Lucia Berlin, Don Winslow, George Pelecanos, Dennis Lehane, Richard Price, Gillian Flynn, Megan Abbott, Patricia Highsmith, Graham Greene, John le Carré, Margaret Atwood, Siri Hustvedt, Jorge Luis Borges, Robert Harris, Scott Turow, Martin Cruz Smith, George V Higgins, Joan Didion, Lydia Davis, Philip K Dick, Ted Chiang, Hilary Mantel, Jean-Patrick Manchette and George Simenon’s romans durs. And nobody wrote crime fiction like William Shakespeare. Australia is enjoying a tremendous sustained moment in fiction—I’m loving David Whish-Wilson’s Frank Swann series, James Bradley’s climate fiction, the social realist domestic crime of both Christian White and JP Pomare, and everything by the remarkable Jane Rawson. Two slender but powerful books that everyone should read, one local and one international: Carrie Tiffany’s Exploded View, and Guadalupe Nettel’s Natural Histories. Amazing. 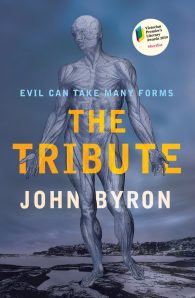 A serial killer is stalking through Sydney, hell-bent on recreating scenes from the Fabrica, the 16th-century foundation text of modern anatomy. The spate of cold, methodical attacks has the city on edge, but the serial killer may not even be the darkest player in this story. Desperate for a breakthrough, decorated homicide detective David Murphy draws into the case his art historian sister, Joanna, and Sylvia, his wife. Unravelling the mystery of who is behind the killings pushes each beyond the limits of what they thought possible. The Tribute is a subversive take on modern masculinity and misogyny told through an irresistible crime narrative. Dark and unpredictable, chilling but sympathetic, it weaves a tapestry of narrative threads towards a mesmerizing climax that will challenge the way you think about everyone you meet. 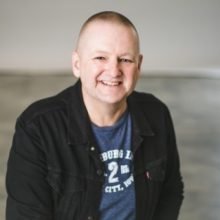 John Byron grew up in Sydney where he went to medical school for a time before leaving in the interest of the public safety. He has worked as a barman, a factory hand, a help desk operator and a federal political adviser. He now lives in Melbourne and works in the university sector. His writing has appeared in The Australian, Meanjin, The Australian Book Review, The Conversation, Time Out and Rip It Up. The Tribute is his first novel and was shortlisted for the prestigious Victoria Premier’s Literary Award for an Unpublished Manuscript in 2019. 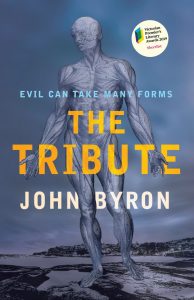