Ruth Druart on Her Heartbreaking Historical Novel, While Paris Slept I arrived in Paris in 1993, speaking only a little French and newly married to my French husband. I had a lot to learn about France and its culture, but what struck me the most were the constant reminders of World War II. Wherever I went I came across plaques remembering Resistance fighters who were killed on that exact spot, or plaques on the walls of buildings mentioning Jewish families who’d been taken away, never to return. Often fresh flowers could be found lying nearby. I became intrigued by this time in history as I imagined how different people would have coped with the occupation. Some would have resisted, others collaborated, but I imagined that the vast majority were just trying to get by and survive. Before I knew I wanted to write a book I began reading personal accounts about this time. I read Helene Berr’s Journal, which is the diary of a young Jewish woman living in Paris during the occupation. I also read Le Silence de la Mer, by Vercors, an account of a German soldier who was billeted with a French family, who refuse to speak to him. Then I went onto read harrowing accounts of the Holocaust, such as The Night by Elie Wiesel, as well as many more. I had no idea at the time that this time period would later become the setting for my novel

The inspiration for the story came six years later, shortly after the birth of my third son. I remember the moment vividly when I was sitting up feeding him in the middle of the night. I loved this time when it felt like the rest of the world was asleep, and I could just relax and enjoy these precious moments of intimacy with my new-born baby. It was a great time for freeing my imagination, and the seed of an idea grew in my head. By the time I had finished nursing my son, the story was complete. I knew there and then that I would be compelled to tell it. Themes that were close to my heart, such as parental love and sense of belonging ran through the story, cumulating in a terrible moral dilemma.

This was a gradual learning phase for me. As I said, I started researching the book before I even knew I was going to write it. I have included a list of books that helped me at the end of my novel. Reading a mixture of fiction and non-fiction gave me a picture of what this time must have meant for different people, and I was also lucky enough to have the opportunity to speak to people here who had lived through the war. I spoke to one Auschwitz survivor, and people who remembered what it was like to have lived through the occupation. Once I started writing my book, I already had a good background knowledge; I just needed to verify some facts as I wrote.

I don’t have a routine. In fact, I write best out of routine, like when I’m travelling – waiting for a train, or in an airport. I love being between places; I find it frees my imagination, taking me away from my own life. I wrote lots of While Paris Slept on the train, on my short commute to work, making notes on paper that I would later transcribe onto the laptop.
At the moment I’m working on my second book, which is set in the same time period but is a totally different story.

Early on, one writer I met and told about my book signed his own book and wrote, “To Ruth, follow your dream”. Though it’s a simple and slightly overused phrase, I clung to it when I felt like I was going round in circles and would never get anywhere. Writing a book and actually getting it published seemed like a far-off dream, and I still can’t quite believe my dream has come true. I would say that if you have a dream, then you have to do everything in your power to follow it. Later on, in my writing journey, I read the introduction to The Alchemist by Paulo Coelho, and it expressed exactly how I felt about following one’s dreams, and I knew I’d done the right thing in the following mine. An Unforgettable Read: Take a Sneak Peek at While Paris Slept by Ruth Druart Heartrending Historical Fiction: Read our Review of While Paris Slept by Ruth Druart 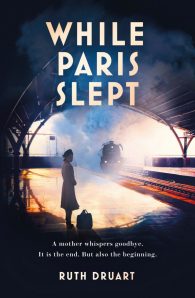 Beautiful. Powerful. Unforgettable. A stunning portrait of the brutality of war and the tenacity of love. In the tradition of Virginia Baily's Early One Morning and M. L. Stedman's The Light Between Oceans. Santa Cruz 1953. Jean-Luc thought he had left it all behind. The scar on his face a small price to pay for surviving the horrors of Nazi occupation. Now, he has a new life in California, a family. He never expected the past to come knocking on his door. Paris 1944. A young woman's future is torn away in a heartbeat. Herded on to a train bound for Auschwitz, in an act of desperation she entrusts her most precious possession to a stranger. All she has left now is hope. On a darkened platform two destinies become entangled. Their choice will change the future in ways neither could have imagined. 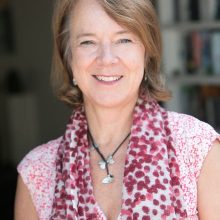 Ruth Druart grew up on the Isle of Wight, moving away at the age of eighteen to study psychology at Leicester University. She has lived in Paris since 1993, where she has followed a career in teaching. She has recently taken a sabbatical so that she can follow her dream of writing full-time. 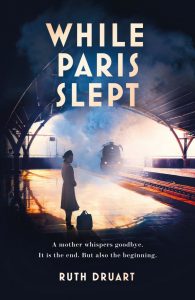