Unique and Compelling: Read an Extract from Devil House by John Darnielle Mom called yesterday to ask if I was ready to come home yet; I went directly to San Francisco from college, and I’ve been in Milpitas for five years now, but she holds fast to her theory that eventually I’m coming back to San Luis Obispo.

“When you get done with your little experiment up there,” she says. There are competing wrinkles in the mythical future she imagines for me; in one variant, she retires and finds a quaint little house in San Francisco, where I was living until I came here. Then we’d only be an hour apart from one another instead of three; we might see more of each other on weekends.

“Mom,” I tell her, “nobody can afford to live in San Francisco anymore.”

“You’re right,” I say, “there are still rich people there. There are also people who spend all their money every month on rent and food, and have nothing left over.”

“It’s a little less like that here, Mom,” I tell her. She doesn’t believe me. My mother is a prophet of ruin. The last time I went home, she kept pointing out places that would be, she said, the next to fall—old brick buildings, crumbling strip malls, grocery stores.

“Everywhere,” she says again. “You’ll see.” She’s probably right. A surveyor walked through the neighborhood last week; I watched from my window, and I saw several familiar faces doing the same from theirs. But it’s hard for me to imagine anyone wanting to do anything to a block like mine. Around the corner and down the street, somebody did get a big idea at some point in the 1960s, and put up the identical duplexes that stand there now in facing rows, one after the other, driveway distances between each of them soothingly uniform, unit after unit. My block’s the odd man out; there’s not enough of it to make it worth anybody’s while, though that didn’t stop somebody from trying, once… A Gripping Genre-Bender: Read Our Review of Devil House by John Darnielle 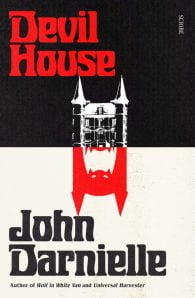 From New York Times bestselling author and Mountain Goats singer/songwriter John Darnielle comes an epic, gripping novel about murder, truth, and the dangers of storytelling.Gage Chandler is descended from kings. That’s what his mother always told him. Years later, he is a true crime writer, with one grisly success — and a movie adaptation — to his name, along with a series of subsequent less notable efforts. But now he is being offered the chance for his big break: to move into the house where a pair of briefly notorious murders occurred, apparently the work of disaffected teens during the Satanic Panic of the 1980s. Chandler finds himself in Milpitas, California, a small town whose name rings a bell — his closest childhood friend lived there, once upon a time. He begins his research with diligence and enthusiasm, but soon the story leads him into a puzzle he never expected — back into his own work and what it means, back to the very core of what he does and who he is.Devil House is John Darnielle’s most ambitious work yet, a book that blurs the line between fact and fiction, that combines daring formal experimentation with a spellbinding tale of crime, writing, memory, and artistic obsession.

John Darnielle’s first novel, Wolf in White Van, was a New York Times bestseller, a National Book Award nominee, and a finalist for the Los Angeles Times Book Prize for first fiction, and widely hailed as one of the best novels of the year. He is a writer, composer, guitarist, and vocalist for the band the Mountain Goats. He lives in Durham, North Carolina, with his wife and sons. 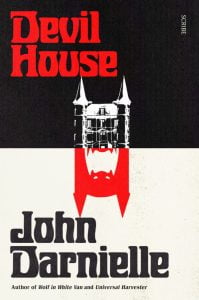