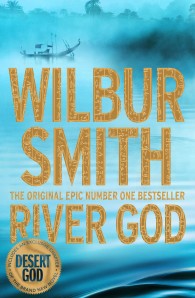 Ancient Egypt. Land of the Pharaohs. A kingdom built on gold. A legend shattered by greed. Now the Valley of the Kings lies ravaged by war, drained of its lifeblood as weak men inherit the cherished crown.In the city of Thebes at the Festival of Osiris, loyal subjects of the Pharaoh gather to pay homage to their leader. But Taita - a wise and formidably gifted eunuch slave, sees him only as a symbol of a kingdom's fading glory. Beside Taita stand his proteges, Lostris, daughter of Lord Intef, beautiful beyond her fourteen years; and Tanus, proud, young army officer, who has vowed to avenge the death - at Intef's hand - of his father, and seize Lostris as his prize.Together they share a dream - to restore the majesty of the Pharaoh of Pharaohs on the glittering banks of the Nile. 'Superlatively evocative....Smith`s descriptions hardly falter over 500 pages and [River God] has relentless momentum.'  Observer'Big, brave and blockbusting … brilliantly detailed descriptions of life on the Nile’  Mail On Sunday'Grand mythical material…. the set pieces are fabulous’  Times Literary Supplement'High adventure … there is never a lull in his majestic novel overflowing with passion, rage, treachery, barbarism, prolonged excitement and endless passages of sheer, exquisite colour’  The Washington Post‘A rich, compelling look back in time [to] when history and myth intermingled’  San Francisco Chronicle‘A grand tale of intrigue, deception, true love and exile’  Denver Post'An epic of sex, death and intrigue in the Valley of the Kings … richly written … packs in the action … excellent’  Weekend Telegraph