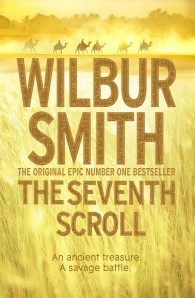 A fading papyrus, nearly four thousand years old. Within it lie the clues to a fabulous treasure from an almost forgotten time . . . a riddle that becomes a savage battle across the unforgiving terrain of North Africa.When her husband is brutally murdered, beautiful half-English, half-Egyptian Royan Al Simmu is forced to seek refuge in England. With eminent archaelogist Nicholas Quenton-Harper, she can pick up the pieces of her shattered life and find the courage to return to Ethiopia. For Duraid. And for the dreams of an ancient Pharoah . . .Because others will stop at nothing to claim the prize as their own.Following on from River God, and prequel to Warlock and The Quest, comes this triumphant African adventure. 'A desert sandstorm couldn't get pages turning faster than Smith' Independent On Sunday'Full blooded, muscle-on-bone-crunching treasure hunt . . . it is non-stop action'  Daily Express'Throughout The Seventh Scroll, as in all Wilbur Smith novels, the plot twists and turns with constant surprises ... This old-fashioned adventure novel keeps the reader enthralled all the way to its very exciting conclusion.'  The Washington Post Book World'A consummate sequel, The Seventh Scroll perfectly complements River God, its phenomenally popular precursor. Smith excels at action sequences, getting his attractive heroes and despicable villains into and out of hugely entertaining predicaments, all the while tossing off vivid descriptions, bits of historical detail, and classic low-key British banter.'  Booklist'This well-crafted novel is full of adventure, tension, and intrigue.'  Library Journal'Intoxicating... A heady mix of exotic adventure, romance, and Egyptology. Smith is a master.'  Publishers Weekly'The desert sandstorm couldn't get the pages turning faster than Smith.'  Independent On Sunday'Full-blooded, muscle-on-bone-crunching treasure hunt ... it is non-stop action and thrill.'  Daily Express'A rousing good sequel to River God that takes the immensely entertaining form of a high-tech treasure hunt ... A master storyteller at the top of his considerable form.'  Kirkus Reviews'Life-threatening dangers loom around every turn, leaving the reader breathless ... An incredibly exciting and satisfying read.'  Chattanooga Free Press